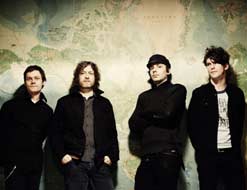 Here’s a spellbinding (quite literally!) clip from one of the first names in contemporary psychedelia and power pop. By now, longtime listeners — and there are many — know exactly what they’re going to get when they play a track by The High Dials: sugar-smooth vocal harmonies, chiming guitars and spacy synths, trippy sonic effects, cryptic and deliciously-addled lyrics, and gorgeous, instantly-memorable choruses. It’s a style they introduced on the neo-psychedelic landmark A New Devolution, refined on the critically lauded War Of The Wakening Phantoms, and perfected on the self-released Moon Country. The latest High Dials set is their most confident and compelling yet; better still, they’re secure enough in their excellence to marry sword and sorcery visuals to their wild sonic excursions.

That’s right: the clip for “Killer Of Dragons”, their latest single, is winningly Tolkeinesque. Shot in rural Hawkesbury, Ontario — miles into the enchanted woods from the band’s native Montreal — the video depicts an epic battle between a demonic beast and a plucky band of minstrels. (The adventurers are The High Dials themselves, assisted by a venerable and powerful mage.) It’s played for laughs, of course, but not completely: there’s real love for fantasy conventions apparent in every frame. There are nods here to World Of Warcraft, Highlander, and Monty Python’s Holy Grail; anybody who has ever swung a sword in anger against an evil abomination — if only on the PlayStation — will smile in recognition.

The clip is appropriate accompaniment for The High Dials’s bewitching fantasia. “Killer Of Dragons” washes in with echoed percussion, a hypnotic six-string strum, and delicately-reverbed vocals, and concludes with a stuttering, psychoactive synthesizer loop. In between, the Montreal quartet shoots off all the fireworks in their substantial arsenal, wrapping an incandescent melody around an irresistible guitar riff. As always, the instrumental performances are nothing short of stunning — The High Dials have earned a reputation as one of the most electrifying live bands in the psychedelic underground, and they’ve been able to translate the hypnotic energy of their live set to the songs on Moon Country.

Video director Mila Aung-Thwin is an accomplished young artist in his own right: his work on Up The Yangtze, a 2009 documentary about the regrettable consequences of a gigantic geo-engineering project in China, won him a Genie Award from the Academy of Canadian Cinema. His clip for “Killer Of Dragons” might be lighter in tone, but it has a certain gravity all its own. For starters, the members of The High Dials play it straight, donning constumes and even playing archaic instruments. Moreover, the wizard is one mean customer: he fires sparks out of his staff, vanquishes the beast, and is last seen receding into the mist. Alternately hilarious and weirdly inspiring, the “Killer Of Dragons” clip furthers the High Dials’s reputation as explorers of the first rank.

We’re very proud to be working in with The High Dials to bring you this eclectic musical gem. If you need more info, call Andy Gesner at 732-613-1779 or e-mail us at info@HIPVideoPromo.com. You can also visit www.TheHighDials.net to find out more about The High Dials.

For info about The High Dials’ previous video, “Fields In Glass” click HERE

For info about The High Dials’ previous video, “My Heart Is Black” click HERE