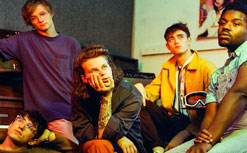 Although Hippo Campus has a lively band name, they dive into topics such as depression and isolation intertwined with self-deluded fantasy. They channel what people feel deep inside, using poetic writing infused with light production and electronic elements that act more like stylish accents. Stripped back and increasingly vulnerable, the world they create releases intense emotions that couldn’t be contained solely in the local scene.

Hippo Campus has been one of the hottest indie bands to hit the scene in the past few years. The band is composed of front man Jake Luppen, co-frontman/guitarist Nathan Stocker, bassist Zach Sutton, and drummer Whistler Allen. In 2013 they met at St. Paul’s High School in Minneapolis and, with a shared love of Two Door Cinema Club and Vampire Weekend, started the band. They had a great start, making an appearance on Conan in 2014 for their debut EP Bashful Creatures. After refining their craft, they released their debut full-length album in 2017, Landmark, which would later go on to chart the Billboard Top 200. Currently, they are headlining a world tour and working on their second studio album Bambi, which will be released later this year. For a taste of what is to come, they have begun to release their first singles off the project including the introspective title track. With 2.1 million streams on Spotify and adds to major playlists (New Music Friday, Pop Rising, Mood Booster, and Ultimate Indie), adds at alternative radio (including Sirius XM’s Alt Nation and Spectrum), and support from FADED, Billboard, Paste, MTV, and more, “Bambi” is already a clear hit. With over 800,000 views on YouTube, the music video is as well.

In the music video for “Bambi”, a blue landscape is painted in an upside-down world with multiple visions bordering on hallucinations. As reality is twisted and blurred, a purgatory-like state encompasses the background. “Bambi” is a representation of their own minds with a fun and light visual contrasted with heavy lyrics such as, “give ’em hell, give ’em teeth like you taught me.” Directed by Kyle Sauer, the confusion deludes the suicidal thoughts trapped behind the screen. Frontman Jake feels isolated in his world but doesn’t want to seek help in fear of bringing others down with him. As Bambi the deer frequently asked about the world around him and was cautioned about the dangers of life, this single keeps the same energy. The curtains close and the video ends but the conflict seizes to be resolved as he falls deeper and deeper into the black and blue.

We’re honored to be working with Hippo Campus and we hope you embrace the new clip for “Bambi.” We’d love to see this video added into your cherished programming and online presentations in a timely fashion! Rest assured we’ll have plenty of Hippo Campus merch available for on-air contests and giveaways so don’t hesitate to get in touch. For more information on Hippo Campus please contact Andy Gesner and the HIP Video Promo team at (732)-613-1779 or email us at info@HIPVideoPromo.com. You can also check out www.instagram.com/thehalocline and www.facebook.com/thehalocline for recent updates on Hippo Campus or visit hippocampus.band for more info.