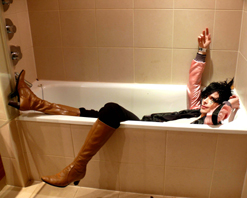 Hello friends! It’s Andy Gesner and the staff from HIP Video Promo, overjoyed to be bringing you our 700th video, and we couldn’t think of a better label than Metropolis Records to share this honor with! This brand new clip comes from one of the most prolific and creative forces in electronic rock music. We’re still reeling from the 2008 stateside release of two IAMX studio albums and one concert set: the diabolical Kiss & Swallow, the defiant The Alternative, and the wildly-exciting Live In Warsaw. America’s introduction to Chris Corner’s music was a fortuitous one: we now recognize him as the most provocative electronic rocker since the heyday of Gary Numan. And on the heels of this revelation (not to mention all these terrific songs!) comes the brand-new Kingdom Of Welcome Addiction: the boldest, strangest, most ambitious IAMX project yet. Here is Corner in overdrive, an eclectic electronic set that draws elements from techno, new wave, heavy rock, synthpop, Euro-folk, and even flamenco. Corner makes room for the incomparable Imogen Heap on “My Secret Friend”, and breaks out acoustic instruments for “The Stupid, The Proud”. He’s restless, probing, musically omnivorous; he’s constantly pushing himself, and taking his audiences places that they didn’t even realize they were begging to go.

His lyrics are as audacious as ever, too. Corner still whispers secrets and shouts his challenges to convention; he confesses that he does evil things; he sings of gender ambiguity, strange pleasures, and his taste for leather. His fetishes and fixations remain on brave display — and, more importantly, his disdain for conformity has never been clearer. Corner famously left Britain for the more welcoming environs of metropolitan Berlin, and credits the German capital for fostering his renewed productivity; “Think Of England”, the lead single from Kingdom Of Welcome Addiction, is something of a love letter to his adopted home. It’s also a clever reference to a well-known British idiom; there, wives who don’t particularly fancy their husbands are occasionally told to “lie back and think of England” to get themselves through a sexual encounter. But there’s nothing tentative or regretful about Chris Corner’s performance: in fact, “Think Of England” is the most rocking recording IAMX has ever made. But don’t fret, synthesizer junkies — there’s enough distorted machine-lead here to satisfy even the most resolute technophile.

Corner is well-known for his outrageous use of cosmetics and costuming — visuals are vital to his project, and that’s reflected in his audacious use of video. IAMX spots have always been arresting and illuminating; the “Think Of England” is no exception to this rule. Michel Breigel’s video for “Think Of England” captures IAMX in concert, but this is far more than just a performance clip: the camera swoops and dives around the musicians, images suddenly flip to stark black and white, lights flash, frames collide into each other. And then there’s Corner himself, sharply-attired and standing in the middle of the stage, holding the concert hall spellbound. The young women singing along in the audience know what America has recently learned: their reputation for electronic music notwithstanding, the members of IAMX are genuine rock stars.

If you need more info, call Andy Gesner at 732-613-1779 or e-mail us at  info@HIPVideoPromo.com . You can also visitwww.Metropolis-Records.com to find out more about IAMX.

For info about IAMX’s previous video, “Spit It Out” click HERE