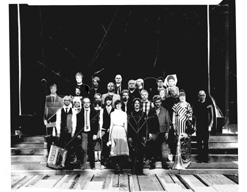 Hello music video programmers far and wide! It’s Andy Gesner and the staff from HIP Video Promo, here to spread the word about the latest clip from one of the world’s best-loved indiepop bands. Those who fretted that I’m From Barcelona principal songwriter Emmanuel Lundgren couldn’t possibly match the candy-coated pop majesty of his debut album can officially cease their worrying now. The lead single from the band’s sophomore effort is here, and it’s as immediate, irresistible, and energetic as anything on Let Me Introduce My Friends. “Paper Planes” proves that Lundgren’s knack for melody hasn’t deserted him – in fact, this may be his catchiest tune yet. Listeners who spent the better part of 2006 trying (and failing) to dislodge “We’re From Barcelona”, “Treehouse”, and “Oversleeping” out of their heads may not believe it, but once they hear Lundgren’s latest chorus, we’re sure they’ll agree (if they can stop humming long enough to nod, we mean.

I’m From Barcelona might be Jönköping, Sweden’s best-known cultural export, but they’re no Nordic secret anymore. Ever since the international embrace of Let Me Introduce My Friends by tastemakers and critics alike, they’ve been a major concert draw all over the world. Their 2007 performance at McCarren Pool in Brooklyn set jaded hipsters dancing, blew the minds of local webloggers and rock journalists, and turned wizened cynics into true believers. Such is the power of Lundgren’s project: twenty-nine bandmembers on the stage, singing their heads off about their stamp collections and their love for their friends, and begging audience-members not to give up on their dreams.

Who Killed Harry Houdini?, the latest release from the Swedish combo, promises fans an excursion into slightly darker territory. French pop singer Soko – known throughout Europe and Australia as the author of the poison-pen hit “I’ll Kill Her” – lends her fetching pipes to a track o n the set. The title is no joke, either: Lundgren has always been interested in mystery and magic, and this time out, he’s managed to impart a little more of both to his songwriting. And then there’s “Paper Planes”. The gigantic I’m From Barcelona chorus is still in place, as is the wild, joyous brass and woodwind accompaniment. But this time out, Lundgren isn’t among friends. “Surrounded by strangers”, he sings, and there’s a note of dread and apprehension in his quavering voice.

Veteran video director and fellow Scandinavian visionary Jonas Odell (U2, Tahiti 80, Franz Ferdinand) has distilled I’m From Barcelona’s newfound anxiety into a very amusing clip. Odell shoots Lundgren in a large, drab industrial elevator; the singer is apparently living here, going through his day-to-day activity as strangers get on and off of the lift. He flosses his teeth, eats dinner from a tray, and tries to get some sleep as a party breaks out around him and revelers sprinkle confetti onto his sleeping bag. “Paper Planes” is, like most of Lundgren’s songs, an honest reflection on something that the singer has experienced – in this case, his irritating neighbors. One by one, they enter the tiny room and act out the scene he’s describing. The video becomes a wry study in claustrophobia, and a commentary on city life – the stalled elevator as a metaphor for cramped living conditions and the challenges posed by aggressive strangers. This is I’m From Barcelona, so it’s played for laughs, but behind Lundgren’s smile is genuine (and totally identifiable!) discomfort.

We are stoked to be working with Stephanie Trick and the folks at Mute Records on I’m From Barcelona’s new video. If you need more info, call Andy Gesner at 732-613-1779 or e-mail us at info@HIPVideoPromo.com. You can also visit www.Mute.com, or www.ImFromBarcelona.com to find out more about I’m From Barcelona.