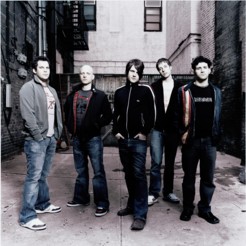 A big and friendly hello to all my fellow music video lovers! It’s Andy Gesner and the staff from HIP Video Promo, back with another terrific video from an emerging new band. One of the best stories in rock is that of the proven but unrecognized talent finally getting its due. Instruction is a young band, but its members are veterans of two great but overlooked hard rock groups – Quicksand and Errortype:11. We’re thrilled to be working with Geffen Records to draw greater recognition to this compelling project.

Prophets are not always first recognized at home. Instruction blew away audiences in England before returning, triumphant, to their native shores. Back in the States, they’ve recorded a debut album of astonishing potency – one that has already earned raves from sources as disparate as Details and The Boston Herald. Produced by Bob Ezrin (Kiss’s Destroyer, Pink Floyd’s The Wall) and mixed by Andy Wallace (too many great hard rock albums to itemize), God Doesn’t Care pairs Instruction’s strong songwriting with the attention-grabbing sound worthy of them.

Make no mistake – Instruction rocks, and rocks hard. But this is one heavy band that takes composition very seriously. Instruction is a genuinely tuneful group: most tracks have several melodic hooks and subtle harmonic ideas. No matter how ferociously the band roars, lead vocalist Arthur Shepherd is always able to guide Instruction through the sophisticated contours of their elaborately-crafted hard rock songs. Then there are his lyrics: blurts of outrage, passion, and purpose, born of frustration and directed against sell-out peers “poised for branding”. Shepherd pushes the cattle/corporate rock band metaphor further in songs like “Death To The Four Car Garage Band” and the self-explanatory “Your Punk Sucks”. “Trust funds and post-punk hair,” he sings, without a trace of mitigating irony, “are doled out to the millionaires”. Like McLusky, a band that they sometimes resemble in intent, Instruction howls against the souring of the meritocratic rock and roll dream.

“I’m Dead” is the love song – or maybe just the relationship song – on God Doesn’t Care. But if that means it’s slightly softer-edged than the album’s most ferocious tracks, it’s plenty heavy enough – even by modern-rock radio standards. Shepherd bellows over the thunderous music, communicating heartbreak, despair, and betrayal. But what’s really remarkable about the song is its complexity: it contains enough memorable melodic phrases and riffs to fill the average hard rock album. “I’m Dead” piles section atop inspired section, each more tuneful and grabby than the last.

The video for “I’m Dead” finds the band performing in a well-lit top-story front room of an abandoned factory. As an inflamed Shepherd hurls his protest against the brick walls, his girl packs her stuff in boxes, staggers down the street, and gets into her car. She’s leaving him behind – and you can tell by the way she tosses their picture out of the car window, and by his face peering back in the rear view mirror. Beautifully shot in faded reds and institutional greens by Rich Newey, the “I’m Dead” clip presents Instruction as a part of the urban landscape: as well-integrated into the post-industrial landscape as any streetlight or crumbling brickface. Newey likes to speed up the film to the pace of a racing automobile, jetting through the streets like a rocket. It’s meant to suggest the flight away from the relationship and Shepherd – yet, perhaps tellingly, regardless of velocity, neither the camera nor the girl ever manages to escape the confines of the city.

One of the greatest pleasures of 2004 was having the privilege of working with Lisa Frank and Christian Taylor at Geffen to bring you such cool artists as Bumblebeez 81, Papa Roach, Sparta, and Rise Against. We’re thrilled to be kicking off 2005 working their newest soon-to-be breakout band. We have an ample supply of God Doesn’t Care CDs for on-air giveaways. They will be on tour this spring, and you can check our website to find out when they’ll be in your area for a video interview or a video ID. If you need more info call Andy Gesner at 732-613-1779, or email info@HIPVideoPromo.com.