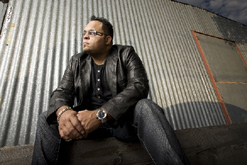 Hey, everybody – it’s Andy Gesner and the staff from HIP Video Promo, here with an uplifting clip from an artist on a Grammy winning streak. Israel Houghton took the award for Best Traditional Gospel Album in 2007 for Alive In South Africa, and followed it up with a 2008 victory in the Best Pop/Contemporary Gospel category with the glorious A Deeper Level. Will Houghton make it three in a row? There’s no way to know for sure yet, but The Power Of One is going to be a hard record to beat. The latest set from Houghton – called “the man who reinvented contemporary gospel” by critics and fans alike – is a masterful fusion of radio pop, devotional music, fiery jazz, radiant CCM, seventies-style R&B, timeless soul and contemporary rock, delivered with the passion and commitment of a true believer. Listen to The Power Of One with an open heart, and you’re virtually guaranteed to catch some religion.

Like much of the most effective gospel music, the tracks on The Power Of One can be heard and understood in a secular context, too. He’s singing to the Almighty, of course, but “Just Wanna’ Say”, Houghton’s latest single, works as a testament of devotion to any beloved figure – a parent, say, or a teacher, or a mentor, or a spouse. Such is the power of Israel Houghton’s faith, and the universal appeal of his message. As always, the music is joyful and exuberant, echoing Earth, Wind & Fire, the Fifth Dimension, Prince & The Revolution, and The Spinners. Tracks like “Just Wanna’ Say” that have placed Israel Houghton at the pinnacle of contemporary gospel music, and opened the minds of so many secular program directors. No other current Christian artist crosses over to a pop audience so effortlessly – or with such unerring grace.

And perhaps that’s because Houghton sees himself as a teacher as well as an entertainer – one unafraid to carry a message of change. The songs on The Power Of One address personal responsibility and social consciousness; as Jared Johnson writes in the All-Music Guide, the album “practically stops you in your tracks, forcing you to sit down and examine new ways to make a difference in the world.” In the clip for “Just Wanna’ Say”, Houghton casts himself as a musical instrument dealer, operating the kind of inner-city store who treats vintage axes with care and love, and demonstrates their value to neighborhood kids. A couple of youngsters stroll into the store and criticize an old electric piano – until Houghton shows them that the key to musical performance isn’t the size of your guitar, it’s the size of your heart. From there, the gospel great shows of his versatility, playing the bass, drums, and piano — and as he testifies to the camera, a chorus line of dancers gather in the street outside the store, each one moved my the rhythm and sound.

We feel fortunate to have the opportunity to work with Stephen Brewster and the good folks at Integrity Music to bring you this incredible new video. They’ve been kind enough to hook us up with copies of The Power Of One so please don’t hesitate to be in touch if you’d like to check it out and get some for on-air giveaways. If you need more info, call Andy Gesner at 732-613-1779 or e-mail us at info@HIPVideoPromo.com.