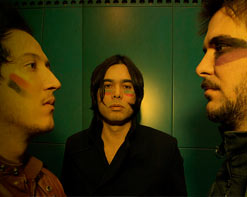 Hey there, programming friends! It’s Andy Gesner and the HIP Video Promo crew serving up two videos from Italian Japanese, a Los Angeles-based alt-rock act whom MTV Australia PUSH have dubbed “the future of indie music.” That’s a pretty bold statement, but the videos for “Jeremiah” and “Le Pony” will undoubtedly prove this point effortlessly.

Though Italian Japanese are a fairly new band who may seem easy to compare to more popular counterparts in their genre – like The Killers, Silversun Pickups and Interpol – don’t be mistaken. There is a definitive uniqueness to Italian Japanese through and through, whether it’s lead singer Allen Colaneri’s ability to wrap his robust vocals around perfectly polished melodies or the band seamlessly switching back and forth from emotionally entrancing tunes to dance-rock beats. This variety in music is evident in “Jeremiah” and “Le Pony.”

The two videos are quite different, too, despite the fact that they are both directed by Candace Jade Lewis. “Jeremiah,” for instance, starts off with some distortion in sound as the camera zooms in on clocks, paintings and a note all present in a woman’s bedroom. As the acoustic guitar kicks in, the targeted woman wakes up, grabs a flashlight and crawls through a closet with various bed sheets hanging all over. The song has a bit of a slow pace to it, emanating a sense of euphoria that matches flawlessly with the video’s dreamlike concept as we follow the main character’s somewhat bizarre journey where scenes of a life she seems to once have known gets projected onto these bed sheets and later a kitchen where she ends up.

“Le Pony,” on the other hand, is more upbeat than “Jeremiah” in both the song’s tempo and the video itself. The clip starts out completely still: the band isn’t moving and the audience Italian Japanese is playing to appears lifeless — up until the lights pull up. As the band gives a hauntingly beautiful performance, repeating the words, “She’s your life, your lie, say your last goodbye,” select members of the audience start dancing, bouncing balloons around the room and becoming more intimate, simply enjoying where they are. The video is kind of a cinematic experience, which is fitting as the song is the type of tune that could make a climactic moment in a movie just that.

Both “Jeremiah” and “Le Pony” are off of Italian Japanese’s self-produced and recorded album The Lush, Romantic Weirdness. The album was released early this year and has been receiving great reviews. AllMusic.com specifically noted: “On many of the tracks, a smooth, swirling spiral of guitars and keyboards floats like a breathy whisper through melodic tunes that opt for what feels like genuine emotion instead of the arch attitude of so many other contemporaneous indie rock bands. But it’s not all creamy, dreamy stuff — there’s a terse, tough side to the Italian Japanese sound that crops up just when you feel like things are about to drift off into the ether.” On top of that, Italian Japanese has remained on CMJ’s Top 200 since the beginning of the year.

Thanks a ton to the crew at VMG for sending over these two videos by Italian Japanese. We’ve got lots of Italian Japanese goodies available for your enjoyment so please don’t hesitate to be in touch if you’d like to get your hands on them. If you need more info, call Andy Gesner at 732-613-1779 or e-mail us at info@HIPVideoPromo.com.