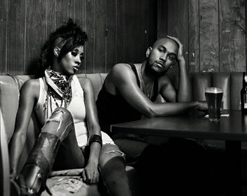 Greetings programmers! It’s Andy Gesner and the staff from HIP Video Promo bringing you a provocative and steamy new clip. Life isn’t fair, and pop music isn’t a meritocracy. But if there’s any justice in this world (or just in the entertainment industry), J*DaVeY will be an enormous success. The Los Angeles duo makes unclassifiable, visionary, wholly undeniable pop music – an unprecedented fusion of avant-R&B, club music, electronica, Bohemian alt-rap, Eighties synthpop, Neptunes techno-funk, Kelis-style computer-rock, and bass-heavy new wave. There’s nothing out there that sounds anything like it – and what it most sounds like is a hit. Remember how, upon release, “When Doves Cry” and “Kiss” felt at once like radical departures from commercial radio conventions and inevitable blockbusters? Remember how you didn’t know what the hell you were hearing at first, but you knew it was great? J*DaVeY’s fantastic cuts boast that same unbeatable combination of innovation and inevitability.

Big claims, sure, but Prince himself wouldn’t contest any of them. He’s a fan, and he invited J*DaVeY to open for him at his 3121 nightclub last year. The influential Questlove of The Roots is another high-profile appreciator – J*DaVeY’s demos were sensations on the okayplayer.com bulletin boards – and he’s called the duo’s music “the swift kick in the ass” he’s been praying for. Press reaction has been ecstatic: YRB, Urb, Vapors, Filter, and many other magazines and periodicals have rushed to praise the adventurous duo for their challenging production, their brilliant songs, and their playful, theatrical stage set. Their soon-to-be-released debut LP is one of the most eagerly anticipated records of the year, and demos, leaks, and single releases continue to burn up the Internet.

And while we’re waiting for the J*DaVeY full-length to drop, we can all get down to “Mr. Mister”. This alt-R&B seduction track sizzles: it’s built from skittering production, distorted lead synth, hyperprocessed six-string, spacy electric piano, and the sultry vocals of Ms. Jack Davey. Davey’s also the co-star of Ethan Lader’s hilariously disturbing video – she shares most of her screen-time with a handsome crash-test dummy. There’s nothing satirical about Davey’s seduction: she’s after the robot, and she’s using all of her wiles to land her man. We watch them in bed together, in a swimming pool, in an office cubicle (the alarmed and repressed reaction of the white-collar workers is priceless), and under the blacklight of a dance club; Davey dresses up in fishnets and sexy lingerie, and plants day-glo lipstick kisses on the pale white face of the impassive mannequin.

Ethan Lader has worked with Chelo and Too $hort, so he known a thing or two about twisted sexuality, and he gives Ms. Jack Davey a chance to strut her stuff. She doesn’t disappoint – she’s as alluring as any frontwoman in contemporary R&B, and when she dances in front of a burning backdrop, it’s easy to imagine just how the panels have caught fire. Davey is so sexy, in fact, that you’ll swear you see the crash-test dummy responding to her overtures. Lader includes a shot of a torn-open condom wrapper; it’s contents have been used, but there’s no telling how or why. Interestingly, Brook D’Leau – the male half of J*DaVeY – doesn’t appear in the clip until its trippy conclusion. He’s shot shirtless, brushing his teeth, in front of a bathroom mirror. Dressed in ordinary denim, Ms. Jack Davey enters the room and embraces him from behind. He looks up – to discover that the mannequin has its plastic arms around him.

Huge props to Dominic Del Bene and the Interdependent Media crew for bringing us on board to promote this new clip. If you need anything J*DaVeY related, don’t hesitate to drop us a line and we’ll hook you up! If you need more info, call Andy Gesner at 732-613-1779 or e-mail us at info@HIPVideoPromo.com.