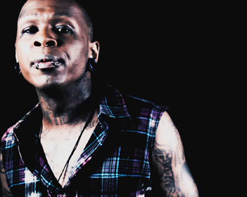 Hello programming brothers and sisters, it’s Andy Gesner and the HIP staff here with a New Jersey spirit that has flipped the music formula for success and created his own unique style that has been hitting the New York radio waves on rock, dance, and hip hop stations all at once! J Mello and his video for “Torture” are set to conquer all terrains of the music world.

J Mello’s first inspiration came from rapper Big L, who once rapped “You can’t kill me/I was born dead,” and for good reason. J Mello came out his mother’s womb stillborn, but the doctors were able to bring him back out of the eternal darkness that awaits all of us on the other side. However, the darkness never quite truly left him alone, as he faced constant abuse at home and found trouble outside the law. J Mello’s father co-founded Kool and the Gang and his mom sang back-up in the band, so he also received a wide range of influences growing up. He now applies that diversity to his music, mixing rock and hip hop together in a way that it hasn’t been before, letting what is essentially a hip hop track become structured and layered like a rock song.

This restless and kinetic combination of swag and skateboarding is what separates Mello from the rest of his contemporaries, and people are already taking notice, including celebrities! When J Mello met Jane’s Addiction guitarist Dave Navarro last year, the two of them instantly hit it off and have played countless shows together. In fact, YouTube is booming with proof! Navarro also helped Mello produce “Torture,” adding a bit of experienced classic rock flavor to the mix. J Mello has also been welcomed by some of the hottest radio stations in the country, including 103.5 KTU and 92.3 NOW. He also has his target set on Matt Pinfield’s 101.9 in the coming weeks. Mello is a DIY hands on guru who will stop at nothing until he reaches mainstream with or without the help of major record executives.

“Torture” is layered with organic drums behind a mix of electronic and acoustic instruments to bridge the link between modern hip hop and old school rock. As Mello lays down a strong flow over the beat, one can instantly relate to his lyrics that deal with heartbreak and broken expectations. Unlike some of his contemporaries that rap about the money and girls they’re most definitely not getting in reality, Mello lays down the ugly truth and, in turn, creates something that is more timeless and beautiful. As the catchy-as-hell chorus erupts, Mello breaks from rapping to sing the refrain behind several rhythm guitars. The video for “Torture” is equally refreshing, featuring a high quality cut of J Mello in the studio. However, this clip is not strictly performance and also chronicles the story of the song, as the pretty young thing that is the subject of the track constantly betrays our New Jersey hero in a poetic downfall of events.

We are extremely proud to bring you a genuine Jersean whose famous background and trouble past only fuels his creative fire. J Mello is the real deal and doesn’t play into any genre stereotypes, instead molding his own niche. We hope you join us into exposing this shimmering track to your loyal following. If you need more info, call Andy Gesner at 732-613-1779 or e-mail us at info@HIPVideoPromo.com.