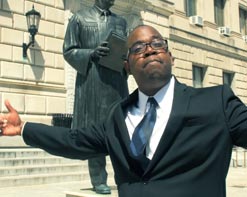 Ask anyone from Newark, and they’ll be quick to tell you that though the race riots of the 1960’s were a defining moment in the city’s history, they are not the only thing that defines the city. It is also a city with a thriving community of creative minds and entrepreneurial spirits. Queen Latifah, Whitney Houston, and Naughty By Nature all emerged from the Brick City. Jamal Gray, aka Jace The Great, is the next product of of this proud city, and his new single “Black Lives Matter” is an uncompromising look at the struggle that exists to get past the same racial disparities that have plagued this country for centuries.

Following the release of his latest mix tape “Who is Jace The Great” which was hosted by Young Money’s DJ Scoob Doo and featured the street anthem “Customer” feat. N.O.R.E of CNN, the Newark NJ native and Temple University graduate has again blessed us with his creative penmanship in his new single titled “Black lives Matter.” Inspired by the mistreatment of black people in the past and present “Black Lives Matter” is a record created to mirror the ills of society, which has caused a conscious dialog to begin among people of color.

The video is set on the steps of the beautiful Newark’s Hall of Records. Jace and his crew occupy the area and solemnly stand watch as Jace spits rhymes straight to the camera. His lyrics are a plea directly to President Obama, asking him directly “do black lives matter or is it just chit chatter?” They move indoors for an equally fiery sermon to a captive audience. News clips of Fergurson, Baltimore, Eric Garner, and more are interspersed throughout to reinforce that this problem is still very real and not something that can be swept under the rug anymore. To make matters even more complicated, not everyone in the black community agrees with the message, and if you stick to the end of the video and follow up with the full movie edit on YouTube you’ll see what we mean.

We’re proud to be working with Jace the Great to deliver this powerful and provocative clip. The subject matter may be difficult for some to digest but it is imperative that this conversation be had in this day and age. We are looking forward to giving you whatever you may need to get this video into your programming so please get in touch with us here at HIP Video Promo! You can reach us at (732)-613-1779 or email info@HIPVideoPromo.com . You can also visit www.JaceTheGreat.com/ for more info on Jace The Great.