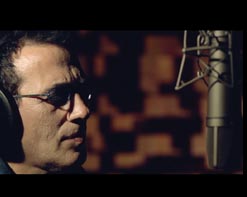 Australia’s Gene Celiberti is the heart and soul of Jam 24. He has a long history in music starting with the drums at the age of 10. He then won a scholarship to study at the world renown Berkeley College of Music in Boston, MA. After completing his time at Berkeley he started playing guitar, piano and singing. He also was signed to world wide publishing contract with Warner/Chappel Music Publishing as a song writer.

In 2013 Jam 24 was created with a series of songs to be released as an album very soon called Bundaran-Hi. The project began by accident whilst on vacation in Jakarta Indonesia after going into a studio to record some new ideas with some of the finest studio musicians in the country. He found the sound produced in this studio to be of a very high quality and represented his songs in a way he had been searching for, for a long time. He found the quality of the musicians in Indonesia to be of a very high standard and was immediately impressed with their ability to play with great feeling.

The first single “We Can Find Love” is a brilliantly executed piece of pop rock power. Mixing in scenes of the energy and vibe of Gene performing the song in the studio, “We Can Find Love” focuses on the vibrant culture and personalities found throughout the streets of Jakarta. Whether it be musicians, street performers, or vendors, everyone is glowing with happiness as Gene interacts with young and old alike, crossing many paths until he finds “the one.” Once they connect the magic really starts. It’s an uplifting piece that celebrates the beauty and power of live, and we are certain that it will put a smile on your face.

It’s our pleasure to bring you such a diverse and well rounded act like Jam 24! Please contact Andy Gesner and the HIP Video Promo team at (732)-613-1779 or email us at info@HIPVideoPromo.com for more info. You can also visit www.JenusMusic.wix.com/jam-24-/.