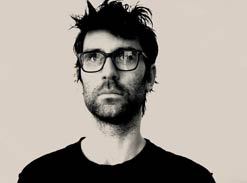 Howdy programming friends! It’s Andy Gesner and the HIP crew bringing you anoher video from one of our personal favorites. Jamie Lidell is a name familiar to us all. Since 2008’s critically-acclaimedJim, fans from both sides of the Atlantic have been anticipating this UK-bred artist’s follow-up. You may remember that Jamie Lidell brought his A-game almost exactly two years ago with his video for “Another Day,” and now he’s done it again with “The Ring,” his second single off of his freshly-released album Compass.

It’s a complete understatement to say that Jamie Lidell is just as much of a visionary artist as he is a soulful musician. While the track itself is classically Jamie Lidell with its carefully orchestrated digital melodies and layered, slightly distorted vocals, the video is a performance piece quite unlike any other. Creativity abounds with the different shots of Jamie Lidell dramatically singing into the camera and wandering the vast empty beach that surrounds him. It has a bit of a vintage feel, slightly euphoric (especially toward the end when he sings, “She is just a dreamer / She is just a dream”), but it’s all around artistic. There’s no comparing a clip quite like this, and it shows that Jamie Lidell oozes originality all around.

Would you expect anything less from this electronica veteran? It’s certainly hard to imagine. Jamie Lidell has been experimenting with his music since the late nineties, and he can simply do no wrong. His brand new album Compass reflects just that. Rolling Stone noted that, “His fourth solo album is a disc of elegantly warped love songs … Compass keeps up Lidell’s blend of creamy come-ons and fuzzy beats.”

With this kind of praise, it’s exciting to see what lies ahead in the next year for Jamie Lidell. His video for “The Ring” is just the start. We’re confident viewers will be drawn into Jamie Lidell’s unique vision and further display of just how much soul and emotion he is capable of evoking.

We’re thrilled to be working with the Warp Records team again, and are thankful that they’ve brought another awesome Jamie Lidell video to the table. We’ve got a handful of copies of Compass on hand for your on-air giveaway needs If you need more info, call Andy Gesner at 732-613-1779 or e-mail us at  info@HIPVideoPromo.com .