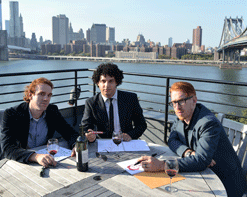 Japan Soul’s upcoming LP, titled Plastic Utopia, is an artful protest of the times. “The album is mostly a compendium of my thoughts on these troubled times,” says Jason Paul. “The conceptual premise of Plastic Utopia is that we have slipped into an apocalyptic alternate universe caused by a rift in time that began around the year 2000. 911, Iraq, the great recession…it feels like in the 90s we were living at ‘The End of History’ on course to avoid all these terrible calamities. Things are no longer as they should be. On Plastic Utopia, Japan Soul gives voice to the artistic resistance of this dystopian world.” Plastic Utopia was recorded in living rooms and bathrooms in Brooklyn as well as a Williamsburg practice space. To fully realize their sonic vision for the Plastic Utopia EP, they worked with Craig Levy, an audio engineer in Clinton Hill, to mix the final versions of the songs. David Rozner stepped up into the roll of lead producer and engineer for the final four songs.

The song “Hey Yah Hey” references the year that Jason Paul travelled with his soon-to-be-wife, artist Eva Orzech, through four continents. They saw incredible things every day for a full year. When they returned to New York it seemed like no time had passed—as if waking from a dream—yet the memories remain vivid. For the video, they commissioned director Christopher Arcella (bridges and powerlines “Bushwick”). Prior to filming they discussed the conceptual setting of their forthcoming album, Plastic Utopia, with Christopher. That world is a dystopian alternate reality that eerily is the one we are all living through. The song “Hey Yah Hey” is a hopeful piece on the album as it celebrates escape and personal freedom. These ideas resonated with Christopher who shared their feelings about the precariousness of things. It was serendipitous that Christopher would be spending a few months in Paris where he suggested filming. The video follows a group of young artists (portrayed by avant garde hip-hop dancers Ismaera and Kimson, and actress Flaminia Vincenti) through the streets of Paris. Their whereabouts are continuously monitored by mysterious drones. The group cleverly finds ways to assert their creative identities and foil the spying drones. Although the video plays like an 80s apocalypse scenario the reality it presents is, disturbingly, not fiction.

We are psyched to be working with Japan Soul to bring you this trippy and eclectic electro-pop number. It’s our hope that you will love it as much as us and include it in your programming, but please do let us know if there’s anything we can do to help make that happen. For more information contact Andy and the HIP team at (732)-613-1779 or email us at info@HIPVideoPromo.com . You can also visit www.JapanSoul.me for more info.