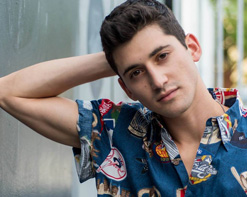 Jared Dylan is a pop/singer songwriter from New Jersey with one of the most impressive resumes in the industry. At a mere 23 years of age, Dylan has performed with some of the biggest and iconoclastic names in the music world including members from Grand Funk Railroad, Badfinger and Alice Cooper. Similarly, he has opened for acts such as Andy Grammer and We the Kings.  In 2012, he released the In Panic EP, produced by Anthony J. Resta, a 12 time RIAA platinum & gold award winning producer. (The title track of which went on to win the 16th annual BMI John Lennon Songwriting scholarship in 2013.)  Since that wasn’t enough for Jared, he took a leap of faith and took the plunge into the national television world, making the cast on season 3 of NBC’s The Voice that same year!  Jared graduated from the Frost School of Music at the University of Miami in 2016 while simultaneously continuing his music career.  In addition to being added to regular rotation on Radio Disney with his single, “Symphony,” Jared has amassed over a million Spotify streams.

The homegrown work ethic of this talent doesn’t end there. His newest video for the smash single, “We Can’t” displays a more mature Dylan than we’ve seen before. Growing up in the spotlight the way he has can put heavy pressure on an artist, and with this new single, it is obvious that Jared Dylan is once again defying normalities and taking his career into his own hands by self-producing the song and putting his vast experience to work. He’s rising like a phoenix and catching the music world’s attention with his fiery tenacity and resilient fortitude.

“We Can’t” tells the tale of a heart; broken, sore and betrayed. Showing his perspective, Jared Dylan cries, “Even when I feel like dying, you are still my heart’s desire,” showing his inability to shake off this love, no matter how many times the pain brings him to the point of despair. Dylan spends the video thinking back to his former lover. In any social situation, he can’t seem to shake off thoughts of her, or the damage she did to him, and no matter how hurt he is, his love for her still rings true.

We are super excited to team up with Jared Dylan to bring you the “We Can’t” video, and to see it included in your regular programming. Don’t hesitate to let us know what we can do on our end to make that happen. Please contact Andy Gesner and the HIP Video Promo team at (732)-613-1779, email us at info@HIPVideoPromo.com or visit www.JaredDylan.com for more info on Jared Dylan.