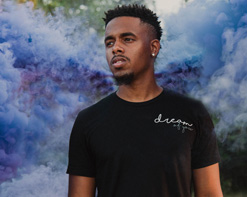 “I love the creative process. Coming up with a concept and then seeing people relate and be impacted by that idea is fascinating to me,” says 22-year-old Jaylon Ashaun, an R&B/Pop artist paving his own way to success. Having discovered his voice growing up in Houston, TX, he started out his progression as an artist by making beats with his mouth well before he could even talk.

Jaylon graduated to piano lessons at age six after starting to stretch his vocal cords at the age of four, picking up the guitar in high school. Jaylon made his debut as a pop artist in 2015 with the release of his first album, “My Identity,” which set the tone for his sound as a performer. Since then, he has added an album titled “Dream of You,” and several visual aids to his repertoire of releases. His music can be described as “a crossover between R&B and Pop sounds.” Some of his major musical influences include One Republic, Xavier Omar, John Legend, Jon Bellion, and Lianne La Havas.

“Settle,” is accompanied by a cinematic video full of masked-characters in varying disguises, including a handful of pig-faced creatures creeping eerily around a stoic Jaylon. With a slow and steady pace, a muddled and browbeaten Jaylon can be seen realizing his strength and potential. Not your average pop music short, the video takes place in a simple setting, using Jaylon’s natural talent and artistry to lure in viewers. This elevating track with its stripped down beat and compelling vocals, will enchant and encourage even the most downtrodden of audiences.

We’re thrilled to be working with Jaylon Ashaun and hoping we can count on everyone’s support on this! Please contact Andy Gesner and the HIP Video Promo team at (732)-613-1779, email us at info@HIPVideoPromo.com.