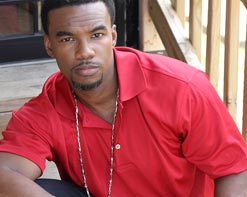 With a smooth and nimble flow and a sound that boldly brings back some of that classic boom-bap flavor, Jelani Lateef (aka J Fury) is one of the premiere, up-and-coming independent rap artists in Chicago. But the road has been long, winding, and difficult. After cutting his teeth in Chi-town’s battle rap circuit, Lateef’s interest in making beats led him away from the mic to work with other Chicago-based artists as a producer. Eventually, he began managing artists as well. Without knowing the business side of the music industry, however, many of these collaborations ultimately ended in a series of frustrating losses, setting him back to square one. Determined to soldier on, Lateef eventually got back behind the mic, and began his solo career. He formed the Manhood Ent. production company, and after a series of mixtapes began stirring up buzz, he released his first official album, My Soul to Keep, in 2011, making waves, opening doors, and setting the current scene. This past Summer, Lateef dropped the sequel–My Soul to Keep 2–and has recently released a brand new single and video that is sure to turn heads. HIP Video Promo is proud to present the wildly creative clip for Jenali Lateef’s “The Lyrical”.

Anchored by a classic hip-hop beat and a series of dark, jazzy piano loops, plus scratches courtesy of special guest DJ HasH, Jelani spits a steady stream of fire with a cool confidence that cannot be ignored. “The Lyrical” is named for himself–as in “the incredible, lyrical J Fury”–and that title is certainly earned again and again throughout the track’s entirety. His lyrics detail how far he’s come: “Came from the bottom as a man with a wish /  Now I’m CEO, round the clock, handling shit.” And they also speak to what he’s overcome: “Can’t explain the hunger. I came from underestimated, overlooked, and rejected to making majors wonder.” But ultimately, the track is about how much further he wants to go: “My destination: the top. Displaying patience, I’ve been waiting to drop.” With tracks as strong as this, it shouldn’t be much longer now.

The video–directed by David W. Johnson for SEI Studios–is a striking visual departure from your average clip. After establishing the setting as “Hip Hop Present Day”, we are thrust into the city of Hip Hop (“the city that lost its way”), a graphically-rendered absurdist nightmare cityscape that looks like a cross between a video game and a comic book and serves as a metaphor for the state of hip-hop music. We walk along with Lateef as he strolls the streets, dismayed by the chaos. Along the way, we see knife-wielding maniacs and twerking big-booty girls as well as dragons, dinosaurs, and monsters. The occasional word balloon let’s us know exactly what Lateef is thinking at these encounters. And in perhaps the video’s funniest moment, after first declaring “Hip Hop can’t get much scarier”, Lateef immediately walks by a poster-sized tweet of Macklemore and Iggy Azalea that says “the king and queen of rap.” To which, he shakes his head and responds “**sigh** it just did.” Interspersed with some performance footage of Lateef and DJ HasH, this clip is innovative, interesting, and entertaining from start to finish.

For more information on Jaleni Lateef (aka J Fury), his new album My Soul to Keep 2, or his wild new clip for “The Lyrical”, please contact Andy Gesner at (732) 613-1779, or e-mail the HIP Video Promo staff at info@HIPVideoPromo.com .