The Jessica Fletchers “Summer Holiday & Me” 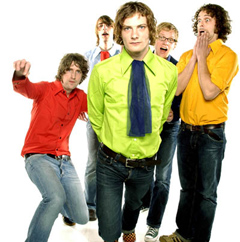 Summer is here! It’s Andy Gesner and the staff from HIP Video Promo checking in with another excellent video. Chances are, wherever you are, the sun is shining, the breeze is balmy, and you’re in the mood for some hot seasonal music. Now, Norway might not be the first place that comes to mind when you think about summertime songs – but consider: Scandinavian summer days are far longer and brighter than those in Southern California. The Jessica Fletchers sound like they’ve never left the green fields and the direct sunlight, and they’ve got enough energy and ideas to fill the long Oslo summer days with the brightest, warmest sounds. This is vacation music of the purest kind: upbeat, immediate, brief and delicious as a hot summer holiday.

The delirious latest album from the Norwegian quintet is titled Less Sophistication – but don’t believe that for a second. It’s filled with the same clever songcraft and inventive arrangements that made What Happened To The ?, their stateside debut for Rainbow Quartz, a leftfield hit in 2003. On What Happened To The ?, The Jessica Fletchers presented themselves as letter-perfect classic pop revivalists, convincingly conjuring the spirit of landmark psychedelic bands. Tracks reminiscent of the Move, the Small Faces, and the Kinks at their mid-Sixties peppiest coexisted with snappy proto-punk and Barrett-era head music. Less Sophistication updates the production a bit, and adds a bracing dose of raucous guitar, but The Jessica Fletchers haven’t tampered with the formula. Fans of the band will find the sound of these eleven new tracks immediately familiar, convincingly timeless, and welcoming. If the band has slowed down their breakneck tempos enough to write and record a few ballads straight from Strawberry Fields, rest assured that there are enough spazz-out shouters here to satisfy the most inveterate garage rock loyalist.

“Summer Holiday & Me” is such a song. It’s a blast of sugar-coated guitar pop that slashes out of stereo speakers with the assurance of the Hives or The Apples In Stereo. Throughout, the vocalists’ lines are punctuated by red-hot fills from sensational organist Mats Innsto – a master of popular period styles from cheesy Farfisa to screaming B-3. The result? A perfect pop confection that wouldn’t sound out of place on modern radio or on a bootleg collection of BBC classics from the late Sixties.

The video for a song this dizzy could not be altogether serious. Lasse Gretland obliges with a visual lark: a bright summer day of a clip, colored by the vivid greens of lawns and foliage and the rich terra-cotta of clay tennis courts. The director captures the band in performance in the frontcourt, strumming their guitars while a blonde struts suggestively as she collects loose balls and chalks the lines. She runs into the woods with the bandmembers in pursuit; later, she dances, unclothed, her body partially covered by the tall grass. Throughout, she is followed by a man in a gorilla suit, and another wearing the head of a wolf and the sweatpants of a jogger. They communicate on telephones, fumbling with the receivers as they watch her gyrate. Meanwhile, the hot sun pours down bright high-summertime light on everybody, bathing the band, the girl, and her “animal friends” in brilliant, glorious light.

Our continuing work with the staff of Rainbow Quartz has become a warm reminder that there are still great indie labels dedicated to backing deserving artists. Currently on a West Coast tour, The Jessica Fletchers will be returning to Europe in mid July and will be recording their next record in the Fall! We would be happy to arrange video interviews/id’s with any video programmers interested in this incredibly cool Norwegian pop phenomenon. If you need more info call Andy Gesner at 732-613-1779, or email info@HIPVideoPromo.com. You can also visit www.TheJessicaFLetchers.com to find out more about these fun and inventive songwriters.