Jet “Are You Gonna Be My Girl” 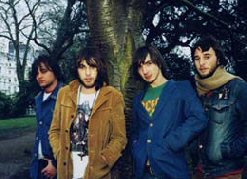 JET, an over the top four-piece from Melbourne, Australia, have established a solid reputation in their homeland and have become the darlings of the British press – the oracular NME calls them “the hottest rock band of 2003.” That may be, but the band’s sound is solidly rooted somewhere in 1968. They’re versatile in the same way the Stones or T Rex were in that grungy, sweaty golden age. Fans of The Who and AC/DC will welcome JET with open arms, as will followers of current favs like Black Rebel Motorcycle Club and D4. JET are even being called the “Australian Oasis.” They’re unabashedly raunchy, cocky and opinionated, but they sure are fun. Elektra is ecstatic about this band’s deafening buzz and here at HIP Video Promo we are thrilled to be on board for the ride.

Hype can be a dangerously double edged sword. In the wake of the success of fellow Aussies The Vines and The Datsuns, JET were courted by every major record label in the world. Settling on Elektra, it looks likely that what The Strokes were to 2001 and The White Stripes were to 2002, JET will be to 2003. The band opened for the Rolling Stones in Australia earlier this year and were even given the rare privilege of selecting their producer, deciding on veteran Dave Sardy (The Dandy Warhols, Marilyn Manson).

The video is for the first single “Are You Gonna Be My Girl” from their upcoming debut CD being released on September 16. The single immediately brings to mind the verve and tenacity of Iggy Pop’s “Lust for Life” and pays tribute to that magical time in rock n’ roll history. JET is triumphant in bringing back drunken, hairy and chaotic retro-rock. True to the band’s no-nonsense attitude, the video is shot in crisp, basic black and white, with JET performing the compulsively catchy single in an absolutely featureless setting. This sounds like it might be dull, but the technique serves to focus all attention on the performance. Combine that with some snappy cutting and innovative angles, add some psychedelic doodles literally bleeding from the band and their equipment…Toss in the girl in question, dancing in sexy silhouette, and this clip is a winner. “Are You Gonna Be My Girl” isn’t about breaking new musical ground – it’s just damned fine rock n’ roll played to sweaty, gin-soaked perfection

We are going for adds for JET’s “Are You Gonna Be My Girl” video on August 8th and 11th. HIP Video is very stoked to be working with Diane Van horn and Larry Max at Elektra Records on this priority project and will be fully prepared to fulfill all of your JET needs. To help keep the buzz solid until the CD is released in September, HIP Video is giving programmers a unique opportunity to get in on the ground floor. Any programmer that adds the new JET video will be entered into a drawing to win a cool RAAF (that’s the Royal Australian Air Force) leather BOMBER JACKET. For the latest and greatest about JET, call Andy Gesner at HIP Video Promo at 732-613-1779 or e-mail info@HIPVideoPromo.com”> info@HIPVideoPromo.com. As long as you’re here at HIPVideoPromo.com, use any of the links to the right for more info on other fine bands and musicians. JET will be playing all over the U.S. this fall and we want to make sure that any programmer that wants to see this exciting new band live will be accommodated. The drawing will take place September 30th.