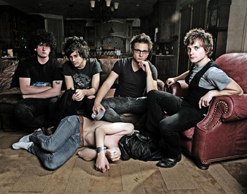 Hello fellow rock and rollers! It’s Andy Gesner from HIP Video Promo, here to share a clip from a young band that has recently graduated from the Garden State scene to the national stage. When we sent you the clip for “Run This City” last October, Jet Lag Gemini were still a fairly local phenomenon. Sure, they’d played the Warped Tour and shared stages with hellogoodbye and the similar-sounding Halifax, but their regional fame hadn’t yet spread to rest of America. What they had was talent, and confidence to burn: when Misha Safonov sang about his “army” on the band’s debut single, they may not have had one, but he sounded dead certain that one would materialize in short order.

Turns out he was right, and then some. What a difference a year (and an album release) makes: Jet Lag Gemini has become one of the hottest concert attractions in the pop-punk underground, and the group is currently touring the nation with the All-American Rejects.Fire The Cannons, their first full-length, has established JLG as one of the most exuberant and tuneful – not to mention toughest – of the latest wave of hard-rock bands. Songs like “Run The City” and “Fit To Be Tied” are radio-ready and accessible without sacrificing any of the band’s grit or fire. And in Vlad Gheorghiu, Jet Lag Gemini possesses something rare indeed: a six-string gunslinger who fully deserves to be called a guitar hero.

Gheorghiu shoots the works on “Fit To Be Tied”, tearing into the sort of fork-bending solo you’ve probably thought modern guitarists have forgotten how to play. He finds high notes that don’t sound like they could possibly be found on a conventional fretboard. He overdrives and distorts his signal, and keeps it fast, hard, and melodic. It’s the sort of solo we associate with the best hard-rock of the Eighties, and it feels entirely appropriate that in the “Fit To Be Tied” video, he stands in a circle of flame.

The rest of the clip – and the band – is pretty fiery, too. The video begins and ends with a burning car; we’re not told why it’s alight at first, but by the end of the spot, all mystery is dispelled. The musicians of Jet Lag Gemini are caught up in a spy caper: a briefcase that may or may not be stuffed with banknotes is surreptitiously passed from carrier to carrier. Some of the undercover agents have pretty famous faces themselves – members of Hit The Lights and Every Avenue contribute to the subterfuge. But JLG are the stars of the spot, and the performance footage is the real focus of the clip. From the moment they take the velvet-draped stage, they’re completely in command: young telegenic rock stars in their element, and at the very height of their considerable powers.

We’re very excited to continue working with the folks at Doghouse Records to bring you their brightest and best. If you would like to catch the band for a video interview at any of their remaining shows with All American Rejects, drop us a line! If you need more info, call Andy Gesner at 732-613-1779 or e-mail us at  info@HIPVideoPromo.com . You can also visitwww.DoghouseRecords.com to find out more about Jet Lag Gemini.