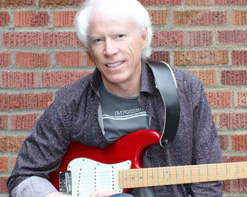 Do music and math use the same parts of the brain?  Well… that depends on whose neurological theories you’re listening to. But for anybody who’d like to persuade the public that mathematicians make natural musicians, Jim Allchin is a powerful data point in the argument. He’s a mathematician and technologist, an award-winning computer scientist and philanthropist, and a brilliant blues guitarist, too; during his tenure at Microsoft, he helped design many of the systems that we continue to depend upon. He’s a former senior executive at one of the biggest and most innovative companies in the world, and he’s beaten cancer — twice.  Allchin retired from Microsoft ten years ago to devote himself to his art, and now he’s assisting humanity in an altogether different way — he’s writing songs, and dazzling audiences, with music that is at once elemental and fresh, exciting and comfortable as an old easy chair.

Now three albums in to a remarkable run as a blues player, Allchin continues to pour his substantial life experience into his work.  Leadership, precision and clear thinking, the need for persistence through hard times, and the practical applications of warm-heartedness — that’s all there in Allchin’s songs.  Overclocked and Q.E.D., his two prior albums, were praised by blues enthusiasts for their approachability, their sturdy construction, and their earned wisdom.  That continues on Decisions, Allchin’s most assured set yet, and one on which he’s joined by some of the finest blues musicians in America today: Michael Rhodes and Reese Wynans of Joe Bonamassa’s acclaimed band, and drummer and producer Tom Hambridge, who has worked with (among many others) Ana Popovic, Susan Tedeschi, and George Thorogood. “You Might Be Wrong” is pure Allchin magic: a gentle, humble, quietly powerful message of compassion from a survivor with a story to tell. Some tasty licks on the acoustic guitar, too.

Directed with love by Nashville filmmaker Kelly Magill, the endearing clip for “You Might Be Wrong” extends the bright, wry mood of the song. There’s plenty of footage of Allchin and his friends doing what they love to do in the studio — fingers on fretboards, friends gathered around microphones, music stands overflowing with charts and notations. But the real action in the clip takes place outdoors, where a group of kids are constructing a clubhouse where everybody is welcome. Under the bright midday sun, they open their doors to a disabled child — who, as it turns out, has quite a lot to contribute to the dynamic himself.

Jim’s undying love of music and unflappable spirit are something we greatly admire here at HIP Video Promo, and we believe you and your viewers will discover the same “special something” in this video that we have. We have copies of Decisions and other Jim Allchin goodies if you’d like to set up a contest or an on-air giveaway, so don’t be bashful about reaching out to us! Please contact Andy Gesner and the HIP Video Promo staff at (732)-613-1779, email us at info@HIPVideoPromo.com or visit www.JimAllchin.com for more info on Jim Allchin.