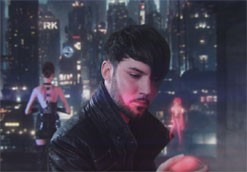 Growing up in the small town of Cocoa, Florida, Joey Danger (Joseph Anthony Stuller) has always had big dream as a musician, filmmaker, multimedia artist, and producer; now, he lives in New York City, where he’s working hard to make them happen. Joey is an award-winning director / VFX artist, having created music videos, animation, viral media content, and films for international brands, magazines, artists, and celebrities. This, combined with plenty of experience in the music industry as a songwriter, musician, audio engineer, and producer has enabled him to independently produce high concept works on virtually any budget, showing what is possible for an indie artist in the 21st century.

Now, eight years since he released the EP Alive, Joey Danger has announced the release of his new EP, Lust & Vulgarity. “This EP is kind of a concept album. I based it on where found myself shortly after I moved to New York. I was in a numb place emotionally and felt like I suddenly had access to everything I always wanted which led me down a rabbit hole of constant self-indulgence,” he says, adding, “After my last EP, I wasn’t interested in doing more of the same creatively. I went through a lot in my personal life and didn’t feel like that person anymore. Rather than rush new music out, I took time to refine myself as an artist and make something that I felt reflects who I am now.”

In addition to the Lust & Vulgarity EP, Joey has also debuted his award-winning music video/sci-fi fashion film for the single “Surrender.” Independently written and directed by Joey, it’s both a music video for the song and a fashion story for IRK Magazine’s Futurism issue, with editorial stills by photographer and film producer Morgan Miller and starring models Anna Miller and Kasia Krol. The video took nearly two years to create, and was shot entirely on a green screen in NYC at Morgan Miller Studios and was styled by Cannon Media Group.

“Surrender” dives into the dark retro-futuristic world of cyberpunk, taking you on a journey with robots, cyborgs, and flying vehicles. The green screen was “a blessing and curse”; with no budget or special effects team, Joey and Morgan had to be creative in making their vision a reality. Wanting to create something special, Joey Danger headed to the remote Blue Ride Mountains of North Carolina, where he could afford to focus all of his time editing, animating, and compositing all of the visual effect shots required to achieve his vision. After nearly 13 months and 100 visual effects shots, a cut of the film was finally completed. Joey says of the film, “Getting the chance to work with so many talented people on a passion project like this was a dream come true. This video is a love letter to the cyberpunk films that inspired me growing up and made me want to become a filmmaker. It gave me a chance to express myself artistically on every level and tell a story in a world I’ve always wanted to create.”

We’re thrilled to be working with Joey Danger to embark on the cyberpunk journey of “Surrender”! We’d love to see this video added to your programming and online presentations in a timely fashion. Rest assured we’ll have plenty of Joey Danger merch available for on-air contests and giveaways so don’t hesitate to get in touch. For more information on Joey Danger, please contact Andy Gesner and the HIP Video Promo team at (732)-613-1779 or email us at info@HIPVideoPromo.com. You can also check out facebook.com/JoeyDangerMusic or Instagram.com/JoeyDangerMusic for the latest updates.