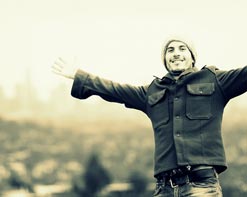 John Zay aims to bring his listeners on an journey. With a message of spiritual evolution through shamanic exploration, his songs create epic climbs through lush sonic landscapes. Growing up the youngest of 4 boys at a house in the suburbs of New York City he was exposed to a wide variety of albums from the 60’s, 70’s and 80’s. He developed his passion for music with groups like Led Zeppelin, Yes, The Beatles, and David Bowie among others. Later his influences diversified including rockers like Alice in Chains, and Soundgarden, the soulful stylings of Seal, Curtis Mayfield and Bob Marley, Drum & Bass from Britain as well as Jazz Fusion and Ambient music. All of these influences and more through a modern slant can be heard in John Zay’s current musical stylings.

Over the years John has based his career out of spots all over the globe including Los Angeles, Hamburg, Germany, Portugal, and currently back to his NYC roots. Through his own Activesoundz studio John has had the pleasure of working with artists as diverse as Steve Madden sponsored Rock-n-Sole winner Mehuman Jonson, legendary Angelo Moore (aka Dr. Madd Vibe) of Fishbone recording and mixing his new album The Angelo Show, and even David Faustino (Bud Bundy/Married with Children) recording his new hip hop projects on Old Scratch records.

For his newest release “Shadows,” John has taken his many years of experience and dove headfirst into his early 90’s roots to deliver a hard rocking and melodic gem. Fans of artists like Living Colour and Jane’s Addiction will instantly bond with the heaviness of the music and the soaring vocal melodies.

The video for “Shadows” is a compelling bit of social commentary. The video begins with John darkly lit against nothing but a black background and sweat beading down his head. The tension is immediately apparent. As John delivers a solemn performance right to the camera, a narrative establishes of a homeless man on the streets contemplating his life and asking his fellow humans for even the slightest bit of help. As John sings he is repeatedly smeared across the face with a wildly varied palette of colors and textures. He never loses his focus on the message at hand, and it creates a complex and satisfying visual. Like the musical chameleon that John has been for his whole career, he adapts to every shape and style thrown his way and embraces it with full authority.

We are very pumped to be working with such a diverse and accomplished talent like John Zay. We are here to get you whatever you may need to get this video into your programming, so please don’t hesitate to be in touch. You can contact Andy Gesner and the HIP Video Promo staff at (732)-613-1779 or email us at info@HIPVideoPromo.com for more info.