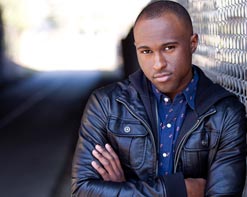 As proven by his previous video for “Vigil ‘n Tea” Jared Price, aka JPRiZM, lives in a place where the nerds and the cool kids mash up. He’s a “rhythmic novelist” on the rise, a quirky new force in what he describes as ‘Electro-hip hop’ (or ‘Electro Hop,’) and he’s emerged as a wicked-cool live EDM performer as well. As the name suggests, he thinks of himself as a ‘prism’ – multi-faceted, and a reflection of the world around him (not to mention the colorful landscape of his spectacular daydreams). With his new video for “Planes 2 Sea” he shares his most autobiographical song to-date, a tale of growing up in an after-school world of electronic companions and created a fantasy life that now drives his music and creativity as an adult.

JPRiZM has managed to bridge the gap between hardcore and nerdcore, finding inspiration in an idealized world where his love of comic books, video games, sci-fi, music-related technology and escapism fuel his creativity, taking the nerdcore genre to a cutting edge new destination. In “Planes 2 Sea”, he imagines the evolution of his ‘mother/video companion’, from Sega Genesis to Xbox/PS4, and a similar virtual trajectory for his ‘father,’ who begins as an old-fashioned tube television and ends up as a flat screen TV. It’s a clever perspective, yet utterly representative of JPRiZM’s hip and self-professed nerdcore roots – and filled with contemporary references.

The video for “Planes 2 Sea” focuses primarily on JPRiZM occupying the vast floor plan of an empty warehouse in neighboring Taunton, Massachusetts. The rustic New England architecture is an appropriate backdrop for this artist who clearly embraces the story and significance of the history that surrounds all of us. Other shots interspersed of a young JPRiZM glued to the front of a his TV are actually played by hi six year-old nephew, and through the permission of the new occupants the shots of him playing video games were literally shot in a room in the house that Jared grew up in, to provide a sense of authenticity.

We’ve very excited to be working with JPRiZM once again and his entire team to bring you this silky smooth jam. Special thanks to Seth Cohen PR for the enlightening and comprehensive info on JPRiZM and “Planes 2 Sea.” We are here to help get you anything you may need to include this video in your programming, so please don’t hesitate to be in touch! Please contact Andy Gesner and the HIP Video Promo crew at (732)-613-1779 or email us at info@HIPVideoPromo.com for more info on JPRiZM.