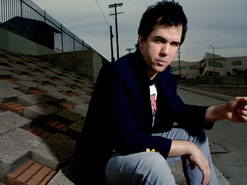 Howdy programmers, it’s Andy Gesner and the HIP Video Promo staff here with a video that is both seriously funny and, at the same time, full of gravity. JTX is the self-pronounced and self-made rock star that has effortlessly been taking over the pop rock scene with his undeniable hooks, witty lyrics, and fearless sense of light-hearted humor. With his foot-in-your-face anti-love ballad “(I’m Gonna) Party Like a Rockstar,” he attained major radio airplay and attained Top 5 status on Sirius/XM. The song was featured on Comedy Central’sLast Laugh 2007, and earned many touring opportunities that rocketed JTX into official rock star status, including touring support slots for Switchfoot, Bowling for Soup, Saving Jane and the rock behemoth Linkin Park. JTX now makes another glorious leap into the limelight with the new fun filled pop single “Love In America” and features everything from disco elements, dirty guitars, and an even dirtier synthesizer that bubbles up, spilling right out of the mix!

Shot in many different cities and states around the US, the video flows like a non-stop party on streets all across America, in tattoo parlors, and pretty much everywhere else! JTX goes as far as growing a mustache just for the benefit of several shots, and, of course, your enjoyment. “Sex, hugs, and rock and roll” is the message from the always upbeat and energetic persona of JTX, who takes the excess to the limit in his outrageous party clip!

“Love In America” is a standalone single which was featured on the front page of iTunes as a Pop Pick and has sold over 50,000 downloads in its first 6 weeks, as well as thousands of YouTube and Lockerz hits in the first week, including a great number fan video contributions! All this buzz is in addition to the half a million views JTX’s last single racked up. JTX will be making radio and performance appearances in support of his current release, so please let us know if you’d like to set up an interview.

Everyone here at HIP HQ is pumped to be part of this exciting campaign. The good folks at Next Plateau Entertainment have provided us with some great items for contests and giveaways, so make sure to let us know and we will hook you up. If you need more info, call Andy Gesner at 732-613-1779 or e-mail us at info@HIPVideoPromo.com . You can also visitwww.NextPlateauEnt.com or www.JTXperience.com to find out more about JTX.