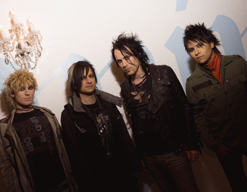 Julien-K and “Kick The Bass” continues the winning streak. Mixed by the able Tim Palmer (The Cure, U2, The Mission), the track sounds terrific: synthesizers squeal, drums pound, six-strings sting, and electronic bass throbs like a berserk heartbeat. But Ryan Shuck’s voice and his powerful microphone presence dominate the track. He sings of the lure of the nightlife, but of its dangers, too; it makes him feel alive, special, but it also blunts his sense of identity. “Powder buffets, drinks, and excitement”, he asks, “do you even know who you are?”

The Julian-K video is an exploration of the rewards – and the dangers – of the glittering milieu discussed in the song. We don’t want to spoil anything for you; suffice to say that the “Kick The Bass” clip comes bundled with an arresting twist ending. Even in a glitzy, decadent Los Angeles nightspot, things aren’t exactly as they seem. Everyone in the club is dressed to kill – top hats, revealing dresses, leather and lace and tight skirts. The girls are drop-dead gorgeous, and the guys look suitably dangerous. Julien-K is the entertainment at this party, and they perform “Kick The Bass” with the energy and drive that fans of Orgy associate with Shuck, Derakh, and their accomplices. But they’re also attendees, and they’re subject to the same sort of fascinations that leave the rest of these night owls spellbound. The guys in the band get female attention; so much so that you might begin to wonder if something’s wrong. And as Bennington, Derakh, and Shuck find out the hard way – there is.

Huge props to the Metropolis Records and Julien-K teams for bringing us this tantalizing new clip! We’d also like to mention that if you’d like to see the uncensored version of this clip, check out www.PlayBoy.com! We’ve also been hooked up with lots of copies of Death To Analog for your on-air needs, so give us a holler to get some! If you need more info, call Andy Gesner at 732-613-1779 or e-mail us at info@HIPVideoPromo.com . You can also visit www.MetropolisRecords.com orwww.JulienK.com to find out more about Julien-K.