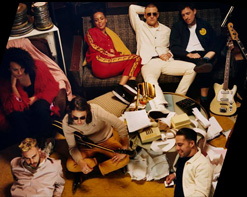 Some artists are easy to pin down: their sound is easily defined, their lineup always consistent, their visuals and brand in a slim, cohesive aesthetic. But some bands are a little harder to describe: London-based group Jungle is one of those bands. Founded by childhood friends Tom McFarland and Josh Lloyd-Watson – who came to be known simply as “J and T” – they’ve expanded into a seven-piece lineup to give their live shows a full and organic experience. The New York Times called Jungle’s live set “sleek midtempo 1970-style funk”, but Jungle is much more than a genre: as Lloyd-Watson told Pigeons and Planes, Jungle is about “self-satisfaction and happiness [that] actually comes from within.”

Jungle first formed in 2013, and the following year – after being nominated for BBC’s Sound of 2014 prize, playing at South by Southwest and Glastonbury Festival, as well as appearing on Jimmy Kimmel Live! – they released their debut self-titled album through XL Recordings. This was followed by festival spots at the likes of Boston Calling and Glastonbury, regular touring, and. placements in video games and TV shows and commercials (“Busy Earnin’” was featured in FIFA 15 and Forza Horizon 2, as well as in Tales from the Borderlands and Brooklyn Nine-Nine). Jungle have certainly kept busy, and their fans are hungry for more: every post on social media has fans commenting things like “release new music goddamn”.

But fear no more, Jungle fans: the band are back with a brand new video for “Happy Man.” Jungle are no stranger to creating intriguing music videos: from 2013 to 2015, they released five videos (“Platoon”, “The Heat”, “Busy Earnin’”, “Time”, and “Julia”), each with a unique interpretation of the song it represented. Directed by JFC Worldwide, “Happy Man” begins with a group of people sitting around a TV, seemingly transfixed by whatever is on the screen. Soon, the wheels begin to turn and a bit of musical – and automotive- magic begins to happen.

It’s an honor and a pleasure to team up with XL Records and a group as inventive as Jungle to bring you the “Happy Man” music video. It’s our sincere hope that you and your viewers will embrace “Happy Man”, share it on your socials, and add it to your programming in a timely fashion. The band are currently on tour, with shows stretching from now until the end of June. Don’t hesitate to let us know what we can do to help you spread the musical magic of Jungle. Please contact Andy Gesner and the HIP Video Promo team at (732)-613-1779, email us at info@HIPVideoPromo.com. You can also visit www.JungleJungleJungle.com or www.XLRecordings.com for more info on Jungle.