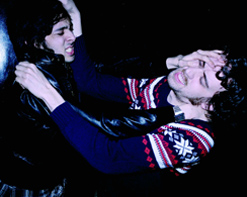 Rock and roll salutations to all! It’s Andy Gesner and the staff from HIP Video Promo, back with a viral video sensation and a song primed to become a dance floor anthem for summer 2007. Remember back in 2006, when Kanye West famously interrupted the MTV Europe video awards and demanded the top honors for himself? The U.S. news media played up the celebrity-confrontation angle, and didn’t have much to say about the video that had won – So Me’s spectacular domestic-destruction clip for “We Are Your Friends” by Justice. Back then, few stateside listeners had heard of the French electro duo. A few intrepid Europhiles may have been compelled to check out the winning clip online, but most American music fans were more interested in the story of the superstar emcee’s tantrum..

What a difference a year makes! By now, if you haven’t seen Justice’s brilliant music videos, you may as well cashier your hipster credentials at once. The sensational clips for “We Are Your Friends” and “D.A.N.C.E.” have become online favorites, displaying the sort of inventiveness, good humor, and remarkable digital energy that we’ve come to associate with Chemical Brothers and Daft Punk videos. Meanwhile, Justice has become the hottest act in electro music on either side of the Atlantic, known in dance clubs around the world for their crisp beats, clever samples, and a distinctive bass sound that is so thick and rubbery that it’s almost tactile. Justice principals Gaspard Augé and Xavier de Rosnay have remixed songs for N.E.R.D., Britney Spears, Franz Ferdinand, and Fatboy Slim, and the duo turned the biggest tent at Coachella this spring into a gigantic house party. The upcoming summer release of the Justice debut album is already expected to be treated as an international holiday by fans of electropop.

The video for “D.A.N.C.E.” is credited to Jonas & Francois, but like everything out of the Ed Banger Records collective of French electro acts, its spirit has been guided by art director So Me. Here, he’s designed a series of T-shirts that, when coupled with some innovative filming techniques, appear to be interacting and responding to each other. The concept is straightforward: two young men in plain tees, one black and one white, walk through a dance club – and as they do, their shirts change, and often in fascinating and hilarious ways. We never see their faces: instead, it’s just the torsos, acting as a forward-moving canvas for So Me’s explosive vision. (It is possible, however, to follow who’s who: they have matching tattoos, but on different arms.) We get logos, slogans, famous faces (in action, of course), a spectacularly-detailed page of comic-book writing that’s scrawled on and erased almost as fast, and even an interruption by a girl in a classic Yes t-shirt and another whose illustration of a synthesizer somehow turns into an actual instrument. Interspersed among the shots of the two walking billboards are stretches of straight animated footage: bright day-glo titles, a tunnel made out of the legs of dancing-girls, hands raised at a sold-out concert. It’s glowing, celebratory, crazy, a night out on the town, a wild thrill-ride through the heart of the Technicolor city.

Jamie Farkas, Adam Shore, Christopher Roberts and everyone at Vice Records are the folks that bring us all of these amazing music videos and we are always excited to be working together to bring them to you! We have copies of Justice’s amazing new album, which is titled “† “, so see what the buzz is all about and get some for all of your on-air giveaway needs! If you need more info, call Andy Gesner at 732-613-1779 or e-mail us at info@HIPVideoPromo.com .