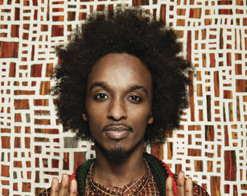 Hey, everybody, it’s Andy Gesner and the staff at HIP Video Promo, here with another must-see clip from one of the most important voices in international hip-hop. When K’naan talks about refugee status, he’s not being metaphorical or hyperbolic: the Somali-born musician fled the mean streets of Mogadishu in 1991. The Siad Barre regime was, at that time, in full collapse, and although Somalia has known periods of relative peace since then, there’s been no full restoration of government. From his musical base in Toronto, K’naan has acted as a Somali spokesperson in exile – in ’99, he even read a confrontational spoken-word piece in front of the United Nations. But although he raps eloquently about the problems of the African Horn (and sometimes even dares to use his native language on record), his pleas for political reconciliation and an end to pointless violence resonate for progressives and egalitarians in all countries. When he writes about “Strugglin’” to make his voice heard, he’s not just bemoaning the state of the contemporary airwaves – he is speaking for every kid living in an underdeveloped nation ignored by the mass media.

His experiences have given his music a moral authority rare in contemporary hip-hop, and authorize him to speak out. “Soobax”, the propulsive liberation anthem that introduced K’naan to his international audience, was an incredibly courageous broadside against belligerent African warlords who have rendered Mogadishu virtually unlivable. Some naysayers suggested that the rapper’s specificity and intellectual precision would turn off first-world audiences. But “Soobax” became one of the most copiously downloaded songs of 2005 (and was recognized by mtvU as such), and The Dusty Foot Philosopher, K’naan’s debut album, won the Juno Award for Best Canadian Rap Album of the year. Since that initial success, the emcee has become a genuine international musical voice, recording with Nelly Furtado, M1 of Dead Prez, Mos Def, The Roots, and many others.

The Dusty Foot On The Road, K’naan’s latest set, is at once more raw, more exciting, more spiritual, and more hardcore than his heralded debut. Tellingly, it features several live tracks – K’naan, whose name means “traveler”, is renowned for his explosive concert performances. As lead single “Strugglin’” demonstrates, he’s improved on the mic, too: his performance here feels assured, energetic, and deft. If “Soobax” was the undeniable underground hit – the cut that sets the boomboxes ablaze – “Strugglin’” is K’naan’s coy overture to mainstream radio. Without making any compromises whatsoever, he’s managed to craft a track for the charts.

We’re comfortable calling the “Soobax” clip one of the most stunning music videos we’ve ever encountered. Shot almost entirely in the African Horn, the clip captured footage of places that Americans rarely see: Kenyan cities, shantytowns and countryside, abandoned supermarkets, playing fields, and war zones. Again, the Somali rapper was giving voice to the voiceless, and turning international attention to the condition of his homeland. Though it’s been shot in the First World, the “Strugglin’” video is no less breathtaking – or compassionate. Opening with footage of K’naan reciting his fiery poetry over traditional African instrumentation, it switches to interior shots of typical low-income housing. The rapper takes us on a guided tour of his urban neighborhood, showing us the barbershops, the tower-blocks, CD stores, underground pool-halls, sneakers hanging over telephone wires. Throughout, his camera focuses on the faces of the people he encounters: serious faces, determined faces, stop-you-in-your-tracks faces, each one bearing marks of some unnamed, individual struggle. It’s the connection he makes with each of these neighbors that he’s dramatizing – his own unerring ability to identify with the longing, the striving, the passion of the dispossessed.

Many thanks to Dominic Del Bene at Interdependent Media for allowing us to bring you this awesome clip! Please be in touch if you’d like to get your hands on some K’naan goodies for a contest or on-air giveaway. If you need more info, call Andy Gesner at 732-613-1779 or e-mail us at info@HIPVideoPromo.com .