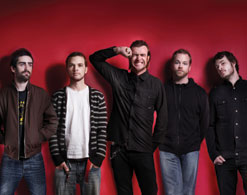 Hello, it’s Andy Gesner and the staff from HIP Video Promo, here with some forward-looking rock from the far side of the globe. The first thing you’ll notice about “Set Fire To The Hive” are the drums. They approach like thunderheads, fierce, menacing, and ominous. Then, Andrew Goddard’s stinging guitar begins — and stops — and begins again. When Ian Kenny starts to sing, the whole thing coalesces: the song closes like a fist, and the punch goes straight to the listener’s gut. This is Karnivool, Australia’s finest and most progressive heavy band, and North America is about to become acquainted with their uncompromising sound.

While Karnivool makes few concessions to mainstream expectations, their music is still wildly popular Down Under. Sound Awake, their latest set, was certified gold by ARIA, and their previous efforts have proven almost as irresistible to Aussie music fans. “Set Fire To The Hive” helps to explain why: although the song experiments with odd time signatures, dissonance, noise, and distinctly odd harmonics, it’s still instantly memorable, and maybe even catchy. “Set Fire To The Hive” peaked at #11 on the Australian singles charts; thanks to heavy rotation on the continent’s ultra-hip Triple J radio show, the Sound Awake album made its debut at #2.

Having conquered the Southern Hemisphere, the quartet now turns their attention to these shores. Karnivool headlined two wildly-successful shows in Los Angeles and NYC this autumn; from there, they crossed the pond for a swing through the United Kingdom. They’ve got unfinished business in Australia, and they’ll be touring their home country for the balance of 2009. But don’t be surprised if you see them stateside in early ’10 — or if you hear their scalding songs on your local commercial-rock radio station.

Just like “Set Fire To The Hive” itself, the first Karnivool clip to reach these shores is dark, hypnotic, suggestive, and endlessly replayable. A pyramid disintegrates; insects are drawn, magnet-like, to the frontman’s face. The band plays in a smoky hell-dimension, lit by strange, thin, red beacons that hang in the air like slashes from a tiger’s claw. It’s a kind of electronic prison — and Ian Kenny spends much of the video chafing at his fetters. In an evocative shot, his head is contained inside a birdcage; later, he’s enveloped in mist, trying to break free. At times, his body seems itself to be a kind of jail: his limbs smoke, his spine twists, and his torso exudes luminous fire.

Meanwhile, Karnivool rocks on behind him, performing “Set Fire To The Hive” with immense energy and conviction. The smoke swirls around them, but they don’t miss a step — the suggestion is that this is their element, and hell is a place they’re unpleasantly familiar with. Karnivool has earned a reputation in Australia as a ferocious live band; one that can fill festival arenas and bring audience-members to their feet. Here, we don’t see the crowd — but we can feel the frenzy.

We’re very pleased to be working with Adam Pollock and the good folks at Sony Music to bring you this fantastic clip. If you need more info, call Andy Gesner at 732-613-1779 or e-mail us at info@HIPVideoPromo.com . You can also visitwww.SonyMusic.com or www.Karnivool.com to find out more about Karnivool.