Kate Miller-Heidke “Caught In The Crowd” 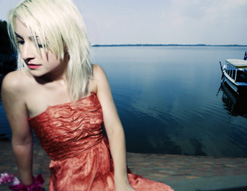 Greetings, everybody, it’s Andy Gesner and the crew from HIP Video Promo, here to call your attention to one of the world’s true one-of-a-kind songwriting and singing voices. Unless, of course, you’ve been Down Under lately, in which case you’ll need no introduction to Kate Miller-Heidke. Her latest single spent six weeks on the top of Australian charts, scored several broadcast television programs, and was nominated for Single of the Year by the ARIA Awards. But even if the Brisbane singer hadn’t reached a mass audience with her deeply-personal and reliably-unconventional music, she almost certainly would have gathered a devoted cult following. She’s just that kind of artist: her songs arrive loaded with personality, endearing quirks, and irresistible choruses (and it certainly doesn’t hurt that she’s gorgeous and videogenic!)

Miller-Heidke’s first Australian single was called “Words”, and it’s a fitting handle — she’s a sure hand with an illustrative metaphor, a playful and articulate lyricist, and a brave and engaging storyteller. “Caught In The Crowd” — her stateside introduction and first American video from her new album Curiouser (available March 16th)– heads back to schooldays and addresses the bullying of a classmate with uncommon frankness. It isn’t just a descriptive tale, either: Kate Miller-Heidke damns herself for not sticking up for her friend, and concludes with a heartfelt and moving apology. The singer brings both characters to vivid life: her indecisive former self and the young social outcast whose treatment by the “crowd” is all too common.

Trained as a classical soprano, Kate Miller-Heidke’s performances often pack a sensational punch. She’s also the possessor of an arsenal of affecting vocal mannerisms that are resolutely her own. That said, she often prefers to sing confessionally — the intimate, plainspoken approach on “Caught In The Crowd” may remind listeners of Kate Bush or Tori Amos at their most conversational. Producer and co-writer Keir Nuttall supports Miller-Heidke’s inventive melodies with colorful accompaniment: sparkling synthesizer, spiky electric guitar and bright acoustic, junkyard percussion, big beats, and radiant backing vocals. The record has already caught the ears of programmers and tastemakers on the far side of the globe from Brisbane: “Caught In The Crowd” won the 2009 International Songwriting Competition. (Judges on the panel included Robert Smith, Ray Davies, Loretta Lynn, and fellow Down Under pop craftsman Neil Finn.)

The young Kate Miller-Heidke has already developed a distinctive visual signature. Her colorful, theatrically-surreal clips often incorporate bright primary colors, evocative costumes, and childlike (but vaguely threatening) set design. Miller-Heidke knows exactly what to do in front of the camera, too: her fashion sense is impeccable, and her charisma pours through every frame. The “Caught In The Crowd” video finds the Australian singer revising science class. She’s there to conduct an experiment of sorts — a doodle torn from an old notebook comes to life on a screen overhead. Right there — among the test-tubes and lepidoptery exhibitions — a flickering schoolroom projector tells the animated tale of the socially-awkward kid whose mistreatment is still on Kate Miller-Heidke’s mind.

We’re very pleased to be working with the team at Sony Independent Network to help bring another fantastic artist to these shores. If you need more info, call Andy Gesner at 732-613-1779 or e-mail us at info@HIPVideoPromo.com . You can also visitwww.KateMillerHeidke.com to find out more about Kate Miller-Heidke.