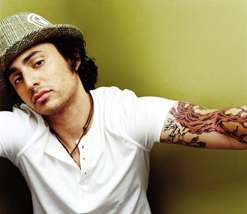 Greetings programmers! It’s Andy Gesner and the staff from HIP Video Promo, here to spread the word about an artist named Keaton Simons. Keaton’s song “Good Things Get Better” has a breezy sound and the feel of a beach-holiday classic. The lead single from his new album Can You Hear Me is unabashedly optimistic and warmly energetic – just like Keaton himself. The young guitarist writes fresh, approachable, radio-ready and forward-looking songs, and he sings them in a sweet and friendly voice that communicates hope, positivity, and good vibrations. That’s not to say that Simons can’t play it rough when he has to: as he frequently and forcefully reminds us on Can You Hear Me, he’s a rocker, too. But his favored groove is a hot-weather one – laid-back, acoustic, tuneful and soulful, unfolding in three-minute bursts of sun and sand.

Fans who hear “Good Things Get Better” frequently wonder aloud why Keaton Simons isn’t yet a household name. Blame the vagaries of the music industry, label machinations, and pure dumb luck; Simons was a victim of the downsizing and collapse of Maverick Records, which torpedoed his debut release. Still, talent will make itself manifest – and the singer-songwriter toured the country undeterred, building his audience and raising anticipation for Can You Hear Me. He also continued his behind-the-scenes work for some of the biggest names in Los Angeles music, including Snoop Dogg, Josh Kelley, and the Black Eyed Peas. (Simons also served as the musical director for Slimkid Tre of the Pharcyde’s luminous, underrated solo effort).

So Can You Hear Me was a long time coming; now that it’s here, it’s a safe bet that Keaton Simons’s voice will be one you’ll hear for a long time. The sunny “Good Things Get Better” is just the most obvious single from the set – other tracks, like the winning “Unstoppable” and the gorgeous “Without Your Skin” are every bit as irresistible. In a recent Sunday “Calendar” feature story, Scott Gold of the Los Angeles Times praised the album as: “…a deft effort at capturing Simons’ unusual and versatile sound. The songs include delicate, jazzy ballads and powerful blues numbers, peppered with elements of Elvis Costello, Eagle-Eye Cherry and Lenny Kravitz.” Simons has hit the road in support of the set, gigging relentlessly this summer, toting his acoustic guitar from coast to coast on the cleverly-named “Sweep The Leg” tour

A Tinseltown kid, Simons is no stranger to the camera: he’s made guest appearances on Malcolm In The Middle andAmerican Dreams, and he’s performed on The Tonight Show and the Late Late Show. His comfort in front of the lens is evident in the giddy clip for “Good Things Get Better.” Here, he casts himself in the role of the classroom joker, enlivening a lecture on climate change on behalf of a rapt audience. As an Al Gore soundalike stands at the lectern, delivering inconvenient truths, Simons enters stage left, looking relaxed and confident. Soon, he wins the attention and admiration of the crowd (and the former veep, too); meanwhile, deliberately over-the-top shots of a roasted world play on the wall behind the singer. With a nod and a wink, the singer pokes fun at stiff and sensationalist reporting – all while drawing attention to a very real problem.

It is a huge treat for us to be working with once again with Audrey Faine and the crew at CBS Records to bring you Keaton Simons “Good Things Get Better.” The label has outfitted us with a sufficient stock of the album Can You Hear Me, so don’t hesitate to get in touch for all of your on-air giveaway needs! If you need more info, call Andy Gesner at 732-613-1779 or e-mail us at info@HIPVideoPromo.com .