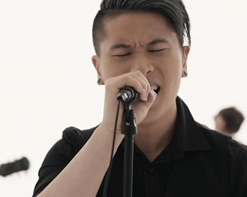 Australia has quite the reputation for being home to a dazzling assortment of wildlife. Kangaroos, echidnas, and quokka are some of the more notable residents, but today we want to talk about a musical chameleon from the Great Southern Land. Kevin Tiah is an artist who has covered the sonic spectrum with his ability to seamlessly hop from pop-ballad to pop-punk to post-hardcore/screamo band and everything in between. With his newest single for “Who We Want To Be,” this Sydney-based artist drops some seriously heavy  hits that finds a marriage of distortion, melody, and flawless execution.

For those of us keeping up on Kevin’s prolific output, this single aligns most closely with “Beneath The Sea.” Both show Kevin’s roots in the post-hardcore scene, but “Who We Want To Be” also introduces a new flare to Kevin’s music that we’ve yet to see. Turntable scratches, baritone vocals dropping rhymes and other subtle production tricks invoke traces of artists like Linkin Park and Papa Roach. The highs and lows of verse to chorus are an undeniable display vocal prowess and musical skills, and the hints of industrial tracks add one more layer to this stellar track.

For the “Who We Want To Be” video, Kevin pulls no punches to create a visual component that matches the energy and intensity of the track. Director Chris Elder places Kevin and his band in an empty white room and lets them rip. Each musician on set furiously attacks the song against the white backdrop and Elder uses a slick combination of overlays, light leaks, and lighting variation to pull it all together in a stunning, rewarding piece. It’s clear that Kevin and company are no strangers to the camera, either, as he engages the viewer behind the lens in such a way that makes this blistering video feel surprisingly intimate and personal.

Kevin Tiah never ceases to amaze us and this master of diversity has done it again with “Who We Want To Be.” It’s our pleasure and privilege to do what we can do help get this video into your programming, so please don’t hesitate to get in touch with Andy Gesner and the HIP Video Promo staff at (732)-613-1779 or email us at info@HIPVideoPromo.com. You can also visit www.Facebook.com/KevinTiahMusic for all-things Kevin Tiah.

For info about other Kevin Tiah music videos, click HERE