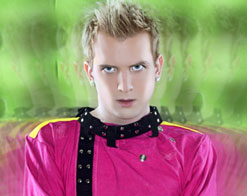 Hello programming friends, it’s Andy Gesner and the HIP Video promo crew to help you shake up those frostbitten toes and break up all of the hanging icicles with an upbeat clip from Killian Wells. You might remember Killian from his instant nightlife hit and party theme, the infectious “VIP.” The multi-faceted Mr. Wells returns to the limelight with his equally boisterous, yet refined, track “Psycho.”

“Psycho” is the answer to your hips’ distress call and the soundtrack your feet have been endlessly requesting every weekend. The song features enough beefy synth to make an Angus burger look like a veggie crunch stick. Killian Wells mixes the quirky and sensual styles of artists like Prince and George Michaels, while wrapping it all up in a sweet coat of rock and electronica in the manner of contemporaries Lady GaGa, Ke$ha and Adam Lambert. Like the aforementioned artists, Killian’s video is nothing short of top shelf quality. Hell, he’s even got a Playboy Playmate! This isn’t your average bunny either. The video features the lovely Miss Hope Dworaczyk, 2010 Playboy Playmate of the Year and cast member in the upcoming season of Celebrity Apprentice, which premieres this March. Despite the welcome and simple concept, where Killian is madly obsessed with Hope, the video is full of style and vivid imagery to get those irises expanding. Killian, a man of keen fashion sense, never lets a frame go to waste without an outrageous and one-of-a-kind outfit dazzling the screen. The Hannibal style restraint mask that he wears in the video took 10 hours to make and is covered in over 1500 black, pink, and yellow Swarovski crystals to match the colors of his custom straight jacket.

Killian is an independent artist who has achieved some major exposure over the past year. His last single “VIP” has received airplay on Top 40 stations and was added to US Airways’ in-flight entertainment Hit List channel, which featured Killian Wells as the only unsigned artist in a lineup consisting of Jay Sean, Taylor Swift and Britney Spears. Killian is also nominated for two OUTMusic Awards including “Best Dance Song” and “Next Generation OUTStanding Original Song.” The talented Wells has also graced the screens of MTV, MTV TR3S and premiered on “Spankin’ New” at MTV Canada. The press has been eager to get their hands on Killian Wells as well, with features in EQ, US Airways Magazine, Bent Magazine, Newsday, Edge Magazine, Central Voice Newspaper, and Gay Life Magazine, just to name a few. With the release of “Psycho,” we are certain that plenty more will jump on the opportunity to cover this rising star. In the meantime, Killian will be rocking dance parties and clubs across the country, and especially in the city that never sleeps – New York City.

We are beyond excited to be working with Killian Wells again. We are certain that there is a party waiting to be unleashed within this track and are here to hook you up with all things Killian for your viewers – just give us a holler. If you need more info, call Andy Gesner at 732-613-1779 or e-mail us at info@HIPVideoPromo.com. You can also visit www.KillianWells.com to find out more about Killian Wells.