Killing Joke “Hosanas From The Basement Of Hell” 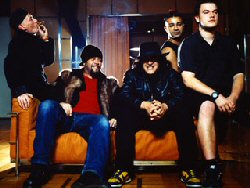 Greetings to all of my esteemed programmer friends! It’s Andy Gesner and the staff from HIP Video Promo, back with a video from a legendary band that has always been fiercely iconoclastic and resolutely independent. In the stylized and synthesized Eighties, Killing Joke was a blast of dark fire. The outfit mixed postpunk artiness with heavy metal fury to create a sound that was unprecedented and often downright frightening. Lead singer Jaz Coleman shrieked, bellowed, and twisted his voice through a series of mechanical filters, and sang cryptic lyrics of horror, metaphysics, and the occult. In so doing, Killing Joke became a major influence on many indie subgenres of the Nineties, including industrial and industrial dance music, alternative metal, and grunge. Most famously, Kurt Cobain cited Coleman and Killing Joke as an inspiration.

By the Nineties, it seemed as though the musical underground had finally caught up with Killing Joke. But after a hiatus spent in Iceland (where he worked to develop the sound of the band that would become the Sugarcubes), Coleman returned to the arena with compositions that were even more punishing and challenging than those of the early Eighties. Killing Joke’s 1980 eponymous debut andWhat’s THIS For?, the furious followup, are considered genre classics; since resuming the band, Coleman and his band have added 1996’s Democracy and a second self-titled release to the catalog of essential art-metal discs. Most bands mellow as they age – Killing Joke, by contrast, has gotten better, louder, and more apocalyptic.

Hosannas From The Basement Of Hell, the latest chapter in a story that has lasted for more than a quarter-century, promises to raise the stakes once more. The title track and first single is quintessential Killing Joke – a savage riff, disturbing lyrics, a fire-breathing, over-the-top performance by Coleman, and a guitar tone that manages to be simultaneously harsh and inviting. And beneath the squall, the rhythm section plays with the suppleness most associated with dance-rock; during the choruses, the rhythm guitar clears away, and Coleman drops to an unsettling croon. It’s like the roughest Smiths song ever recorded, or Ian McCulloch’s darkest vision.

Czech playwright and filmmaker Petr Zelenka has manufactured some hallucinations of his own; he’s one of his country’s best-loved young storytellers, and he’s already established an international reputation for his work. Here, he translates Coleman’s diabolic communiqué to the small screen, matching his bleak prayer with a grim, scary film artifact. Coleman, who has never been afraid to express himself theatrically, appears in the clip in bone-white face makeup augmented by black lipstick. He screams up at the camera like a macabre prophet, directing the action in his basement-hell with fire and knives. The Killing Joke frontman leads the damned to a makeshift altar, where he performs a grisly sacrifice; the crowd, awed and stupefied, moves to the music in a ghastly, mindless sway. Zelenka decorates the faces of the extras with greasepaint and corpse makeup, dresses them in rags, and shoots them stretched on implements of torture. One spectator, in particular, wears black streaks on her face that make her mouth appear grotesquely outsized. Coleman’s own mouth remains open and cavernous, coughing black sentiment at his listeners.

Here at HIP, we are very excited to have the pleasure of working with all the good people at Cooking Vinyl to help bring you this new clip from Killing Joke. We have plenty of copies on hand of Killing Joke’s new CD Hosannas From The Basements Of Hell for all of your on-air giveaways. If you need more info call Andy Gesner at 732-613-1779, or email info@HIPVideoPromo.com. You can also visit www.CookingVinylUSA.com to find out more about Killing Joke.