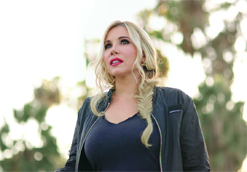 In her early singles, Kim Kline established herself as an artist to be reckoned with: a singer with a pop-rock poise and sound, and a writer and singer capable of expressing powerful and complicated emotions in her songs. Even those who fell in love with Kline upon hearing her bold, confessional self-titled debut album might not be ready for “Stand Tall,” her newest single, and the first track released from her upcoming album Exhale. Prior Kline songs were self-examinations. On “Stand Tall,” the Texas-born singer-songwriter turns that same penetrating gaze outward – and she’s concerned by what she sees. The track takes on one of the scourges of modern American society: bullying. Kline, who has never been one to back down from a challenge, pulls no punches.

The videogenic Kline radiates so much confidence onscreen that it’s hard to believe that she, too, was bullied as a child. She’s overcome that experience, but she knows firsthand how much damage bullying can do. Kim Kline sings “Stand Tall” with the compassion of a survivor and the frankness of an educator. Producer Cristian Robles is no stranger to meaningful music – over his lengthy career, he’s worked with thoughtful, socially-conscious artists such as Peter Gabriel, Celine Dion, Rolling Stones, and Sting – and he makes sure that “Stand Tall” has enough sweetness to highlight Kline’s charms and enough muscle to make its message manifest. “Stand Tall” is tight, direct, undeniable: a song created with a purpose by an artist driven to make a difference.

Kim Kline knows that in a majority of cases, intervention from an outside party is enough to stop a bully dead in his tracks. That’s why the message to “Stand Tall” is directed not merely toward victims. It’s a missive to passive observers, too – an entreaty to get involved. Kline and video director Clark Langon make that clear in their warm and uplifting clip for “Stand Tall”: the heroes of the video include those brave enough to intervene during acts of bullying. Langon, like Robles, is an experienced hand whose track record includes many projects made by artists with philanthropic impulses: Alicia Keys, Brad Paisley, Chvrches, and others. He knows how to tell a story that speaks directly to the consciences of viewers, and in the “Stand Tall” clip, he does so by allowing those who’ve been bullied to express themselves directly, in cardboard and ink, straight at his camera.

We’re thrilled to work with Kim Kline to share the wonderfully crafted, fully realized video for “Stand Tall!” We’d be stoked to see this clip added to your cherished programming and online presentations in a timely fashion, so please don’t hesitate to check it out. We’ll have plenty of Kim Kline merch available for on-air contests and giveaways, so if you’d like to get your hands on some, we’re here for you. Please contact Andy Gesner and the HIP Video Promo staff at (732)-613-1779 or email us at info@HIPVideoPromo.com. You can also check out www.KimKline.com for more info.