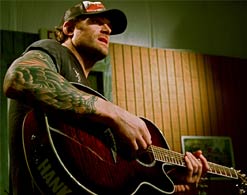 Greetings, everybody, it’s Andy Gesner, here with a new clip from a gridiron folk legend currently making a name for himself in a totally different arena. It might seem too easy to say that Kyle Turley makes music the same way he used to play football. But millions of NFL fans – and members of his growing country-rock fan base — would surely agree that there is no better description of his hard-charging musical project. Turley’s songs hit with the force of a tackle charging the line: they’re blunt, fierce, economical, and ruthlessly effective. And it’s just a matter of time before they compel a stadium-sized crowd to get out of their seats and cheer.

To fans of the current Superbowl champs, the former offensive lineman needs no introduction. Turley played his heart out in New Orleans for five seasons; and to this day, he’s still a hero in the Big Easy. Heralded as one of the league’s most passionate, selfless players, he was noted for his ferocious defense of his quarterback. Turley played with guts and conviction, and became a fan favorite throughout the league — and even though he’s traded his shoulder-pads for a six-string, he’s still moving the chains for his fellow athletes. Part of the profits from Anger Management, his debut full-length album, will go to the Gridiron Greats Assistance Fund for retired football players suffering from traumatic, game-related injuries. The long-term health effects of concussions — the unspoken wages of professional football — have been well-chronicled recently; Turley is the rare warrior willing to stand up and do something about it.

But Anger Management is far more than a charity project. It’s the first chapter of what is likely to be a long and fruitful second career in Nashville: a two-fisted fusion of roots music and heavy rock that Kyle Turley calls “power country”. Because he’s reflexively honest, Turley sings about his NFL career– including a famous incident where, incensed at another player’s bad behavior, he ripped the helmet off his opponent’s head and flung it across the field. The former footballer’s battles with his volcanic temper are well-chronicled here — as is his struggle with the bottle. “Another Whiskey” finds Turley taking refuge in a shot glass, and growling out his outlaw story in a voice heavy with defiance and regret. “It only takes one bullet for a man to die”, sings Turley, an expert in dodging projectiles.

He looks the part of the modern country-rock star. In the video for “Another Whiskey”, Turley trades his helmet for a black knit cap. Bearded and standing tall in blue jeans, he addresses the microphone with conviction; his band roars behind him, barreling through the sing-along choruses. It’s night, and they’re playing
in a forest glade bathed with spotlights — it could be a park, or it could be the deep woods. The hounds are out looking for the athlete, too: a lawman leads the dogs through the trees. Eventually they reach the clearing where the band plays. But by the time the bloodhounds sniff their way between the amplifiers, the outlaw Turley is long gone.

We’re very pleased to be working with the Kyle Turley camp to bring you this hard-hitting new clip. They’ve hooked us up with copies of Anger Management for all of your on-air giveaway needs so don’t be shy about getting in touch! If you need more info, call Andy Gesner at 732-613-1779 or e-mail us info@HIPVideoPromo.com . You can also visit www.GridironRecords.com to find out more about Kyle Turley.