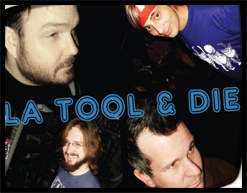 Greetings friends, it’s Andy Gesner and the staff from HIP Video Promo, here with an uproarious clip from a winning gang of North Carolina provocateurs. Remember the acid-drenched conventions of live-action children’s television in the seventies? The absurd costumes, the berserk puppets, the plush props, the oddball villains, the bubble-letter titles introducing the zany cast? LA Tool & Die do, and in their bizarre and compulsively-watchable video for “Don’t Touch My Mustache”, they’ve managed to recreate the spirit – and possibly even the letter – of those programs. But you don’t have to remember H.R. Pufnstuf or Sid & Marty Krofft to appreciate the LA Tool & Die aesthetic: all you need is an open mind, a suitably wild imagination, a sense of humor, and a taste for whimsical, experimental pop. Adventurous, ‘net savvy music listeners have already begun to take notice: Elbo.ws blog calls the “Don’t Touch My Mustache” clip “hysterical” and “high on the list of the best videos of 2009”.

It’s also a perfect match with the group’s dizzy, kaleidoscopic sound. “Don’t Touch My Mustache” features wigged-out analog synthesizer, skittering new-wave beats, call and response vocals, and it’s all delivered in an overriding and infectious spirit of fun. The lyrics, too, manage to be instantly memorable, indisputably quotable, and borderline insane. One voice tells the other not to molest his moustache; the other singer for a French kiss; then they dive together into a comparably loopy chorus. It’s one of the craziest things you’ll ever catch yourself singing in the shower – and believe us, you will. LA Tool & Die specializes in pop hooks, and no matter how far out they go (and they’ll go pretty far), these musicians always put the melody first.

As you might expect from a band named after a sleazy, low-budget gay porno movie from the late Seventies, LA Tool & Die have a taste for guerrilla filmmaking. Lee Grutman, the band’s principal songwriter, directed the “Don’t Touch My Mustache” clip, and assembled the sets from odds and ends and vintage toys that he had around his house (no explanation is given for why Grutman possesses so many Halloween costumes, zombie masks, shiny cardboard stars, or unicorn puppets). Preferring to remain mysterious – or maybe even anonymous – neither he nor any other member of LA Tool & Die appear in the video; instead, they’ve enlisted friends to don fake mustaches and pose for the camera. Men and women alike are implicated in Grutman’s game – in fact, the girls seem even more enthusiastic to stick on the fake facial hair than the guys do. Billed as “a Gurney Bumbleson/Fuzzy Goldenhorn Television Production”, the “Don’t Touch My Mustache” clip pits a herd of unicorns against a coalition of policemen, spacemen, and at least one monster who appears to be little more than a gigantic eyeball. But by the end of the clip, everybody’s fraternizing – and one of the unicorns even gets a little frisky with a fetching (if mustachioed) young woman.

We’re very excited to be working together with Lee Grutman and the folks from LA Tool & Die to bring you this laugh inducing clip. If you need more info, call Andy Gesner at 732-613-1779 or e-mail us at info@HIPVideoPromo.com . You can alsowww.LAToolAndDie.com to find out more about LA Tool & Die.