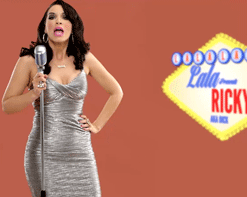 LaLa Romero is a girl who prides herself on looking out for herself and being very proud of where she’s from. Maybe it was growing up in a big family, maybe it was blue collar culture of her hometown in the San Fernando Valley, but whatever it is it has severed her well and allowed her to become a strong and independent artist who follows her own instincts and blazes her own musical trails. All of this is on full, glorious display in the video for “Ricky!”

LaLa knew that to achieve her dreams of pop stardom she would have to work tirelessly and develop a style so unique and interesting that her music would simply be undeniable. Not everyone saw it that way, though, and although beautiful, talented, and interesting, many executives tried to make her fit a model that just wasn’t right. “I’ve been in girl groups & had solo deals where I was limited and misunderstood- the ‘token “spicy” Latina’. There’ aren’t many dimensions to that girl, and I knew to be fully valued I was going to have to break down doors and be ‘the example’.”

So she did what any artist with her drive and determination would do, she simply took matters into her own hands. It wasn’t long before she was gaining tons of radio from LA throughout the southwest, while her video “Homegurlz” topped the charts on MTV Tr3s’ Mi TRL. Her next single, “Sprung On A Thug,” also received major market radio play, and was her 2nd video to reach the #1 spot on Mi TRL. Through it all she’s never lost that connection with her fans that has made her so widely recognized, being one of the earliest artists to use social media as a platform for branding her music and fashion. All of this brings us to the new single “Ricky.”

Remember when we said she has a knack for looking out for herself and calling out BS Well, meet Ricky. Or Richard, as his mom calls him. Or, as LaLa has decided, we’ll just call him DICK! The video is soaked in retro vibes that combine doo-wop sounds, her style is “modern pin-up”, and just an all-out flashback feeling to a time when everyone as little more proper. Or not, as we hear LaLa paints the picture of a badboy that she just can’t leave alone! Even if he’s trying to “Holla at her sister” or finding out about his “baby mama” there’s just something captivating about Ricky. But LaLa knows better and in the end we can trust her to do what’s best and call him out! It’s a hilarious play on words and a visual treat that you won’t want to miss a minute of.

We’re here to hook you up with anything you may need to get this video into your programming, so please don’t hesitate to be in touch! If you need more info please contact Andy Gesner and the HIP Video Promo crew at (732)-613-1779 or email us at info@HIPVideoPromo.com . You can also visit www.Facebook.com/Thereallalaromero for more info.