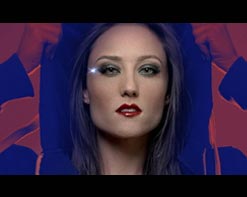 American singer, songwriter, actress and all around impresario Lauren Mayhew takes the definition of bombshell to a new extreme. Her stunning good looks, musical savvy and infectious melodies tend to become stuck inside your head, and it becomes clear with every lyric that this tenacious hard worker was born to perform and touch people’s lives. HIP Video Promo is pleased to introduce the energetic and suspenseful clip for her newest single, “What Is Love.”

Mayhew has performed as the opening act for well-known artists such as Britney Spears, Destiny’s Child, Katy Perry, and even Aerosmith at the Super Bowl. In addition to being a powerful and compelling singer, she is also a gifted songwriter and has licensed over eighty songs to film and television, including NBC’s The Voice, Lifetime’s Dance Moms, E Network’s Giulianna and Bill, and a national commercial for Klondike Bar!

However, this year, Lauren Mayhew is completely focused on the ongoing success of her solo career. Upon finishing her most recent EDM single “What Is Love” with Belgium production team Highbreeze, the video for the single was immediately debuted on FOX Sports 1’s national television program UFC Tonight. The clip has also been featured on countless other blogs, websites, and television outlets such as the homepage of FOX Sports online, Yahoo Sports, Bleacher Report, MMA Junkie, LA Fashion Magazine, Alizé Magazine, and Trend Prive Magazine. But it’s not just American fans that have been moved by Lauren’s soulful new dance single. Her video was just nationally televised as a feature on FOX in Japan and her single is now on regular rotation on the most popular radio station in Cape Town, South Africa.

But the spotlight is nothing new for Miss Mayhew. Lauren has been acting and hosting for nationally syndicated TV shows and features films since she was young. From starring in franchises like Universal’s American Pie: Band Camp, to hosting for NBC’s Access Hollywood, to guest starring on shows like CSI, Law and Order, and Dexter, Lauren was born to entertain. She even toured as the ring announcer and national anthem singer for the WWE where she performed for live packed arenas and televised audiences around the globe.

So what exactly is all the fuss about? See for yourself in the fully realized clip for “What Is Love.” With a conceptualized new twist on the old tale of Romeo and Juliet, scenes from the clip survive around tales between the Montagues and Capulets, which are composed of two infamous teams of UFC fighters including celebrity MMA athletes Urijah Faber and Andre Fili. With suspense that leaves you on the edge of your seat, watching “What Is Love” is like watching a short mini film that you just cannot peel your eyes away from! Serving as Lauren Mayhew’s testament to love, we watch as she fights for love and the balance to keep it restored within the universe.

We are incredibly pleased to be working with such a propulsive talent like Lauren Mayhew and my team and I are here to make sure that any of your Lauren Mayhew needs are attended to in a timely fashion! Call Andy Gesner and the HIP Video Promo crew at (732)-613-1779 or email us info@HIPVideoPromo.com.