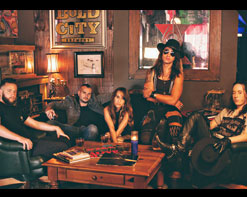 Earlier this year we brought you the “Creatures of Habit” video from Lawless Hearts, an unapologetically vicious hard rock outfit from the Jacksonville music scene. Like many other artists in the genre, the band is quick to celebrate their influences and bring back the classic sound of bands like Guns N Roses, Motley Crue, Bon Jovi and others. They are not, however, attempting to live in the past and have made considerable headway in their efforts to blaze their own trail. With their new video and single for “If I Have To” they’ve achieved another head banging, skull rattling jam that will simultaneously attack your senses while casting an accessible and familiar dose of melody and musicianship.

The new EP, Creatures of Habit, has been a brilliant stroke of songwriting for the band, which consists of vocalist Alex Marie, guitarists Michael Thomas and Justus Sutherland, bassist Rob Joseph, and drummer Corey Ahlquist. Since rock music is something that is often most appreciated in a live setting, when the true power and performance can be captured best, the band has been playing live at a torrid pace to get in front of as many faces as possible. They’ve performed everywhere from Germany and Holland to SXSW to opening spots for national acts like Tantric and the legendary Bullet Boys. They’ve also used their new video for “If I Have To” as a showcase of that live energy.

“If I Have To” is shamelessly and brilliantly hard rock at its finest. When the video starts with flames shooting out of the headstock of a Les Paul, you know it’s going to be badass. The real beauty of the video is that it relies solely on the performance skills of Lawless Hearts. No half-baked plots, no cheap visual tricks, just simply the band pouring their hearts out for the camera. Throw in some strategically place fire and grab a few tasteful shots of Alex Marie amongst urban decay and you have a ridiculously powerful clip that puts the viewer in a hard rock chokehold and doesn’t let go until the end.

It’s always a treat to get to work with the good folks at Pavement Entertainment to bring you the best of the hard rock world, and Lawless Hearts is absolutely at the top of that food chain. We are here to get you whatever you may need to support this band and video, so please don’t hesitate to get in touch with us here at HIP Video Promo. You can reach us at (732)-613-1779, email us at info@HIPVideoPromo.com .

For info about other Lawless Hearts music videos, click HERE