Lennon “No One Knows” 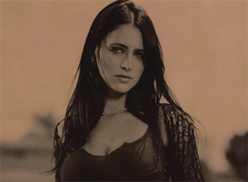 Best wishes to all of my cherished programmers across the country, it’s Andy Gesner and the staff from HIP Video Promo, hoping you all had wonderful summers! Seasons come and go, but promoting incredible rock and roll videos is a year long passion here at HIP. The chill is in the air now, and the pages of the calendar have turned – and every autumn, pop music takes a turn away from the bubblegum toward the darker stuff. Right on time, indie luminary Lennon has returned with Damaged Goods: seventeen tracks of bracing, radio-friendly modern rock. It’s also a remarkably coherent set – a sustained examination of romantic disillusionment, and a declaration of independence and unbreakability. Because we believe that the deeper you plunge into Lennon’s world, the better you’ll understand her, we’ve appended a second video to the reel we’re sending you. Both clips were shot by the same director, and it’s possible to see the “No One Knows” video as an extension of the spot for “Where Do I Fit In”, the lead single. The color palette is similar, the singer’s performance is similar, and the narratives are virtually continuous.

Those who’ve followed the Lennon story so far know there’s no way to pigeonhole this artist. Her debut, the bone-rattling 5:30 Saturday Morning, spiked her straight-ahead modern rock with elements of nu-metal, darkwave, and industrial music. The success of her first offering won her opening spots for Monster Magnet, Alice Cooper, and The Cult, and she earned a reputation as a young woman tough enough to slug it out with the big boys. (This reputation has now earned her a big spot as the opener on this fall’s Aerosmith/Motley Crue Root Of All Evil Tour!) Then, just as she was being discussed as a nascent metal monster, she changed her game completely for her followup. Ironically titled Career Suicide, it proved to be anything but: piano and strings reinterpretations of several songs from 5:30 Saturday Morning, plus several new songs that suggested Tori Amos and Fiona Apple as much as Nine Inch Nails.

Lennon’s latest splits the difference between the ferocity of her debut and the reflective nature of the followup, and adds a radio-ready sheen to the mixes. “Where Do I Fit In”, a story of shattered love, is sweet enough to justify its top-40 aspirations; “No One Knows”, the album opener, would fit in equally well on modern rock and pop playlists. The songs complement each other, and Lennon’s impassioned performances make it completely believable that she’s singing to the same lover. It’s an intensity she’s able to sustain over the course of Damaged Goods, and director Aleksandar Kerekes has been able to translate that focus to film.

The clip for “Where Do I Fit In” is a phantasmagoria of images; a nightmare of betrayal and agitation, set in a strangely depopulated urban setting. Lennon stands in a deserted courtyard where she’s menaced by spectral, hooded white figures. Strange black bubbles float around her, too – she’s able to swat one with her hand, but she can’t clear the field. Kerekes keeps cutting to shots of Lennon’s beloved in carnal embrace with a woman; at first it’s hard to tell if it’s the singer or somebody else. The director lets the camera hover there just long enough to intrigue us, but not long enough to form any concrete impressions. As a visual metaphor for images that a jealous lover can’t shake, it’s remarkably effective.

Those images and associations are extended in the video for “No One Knows”. Here, she actually watches the betrayal unfold. Infuriated, the singer splashes in a bathtub, playing with electricity. The clip only gets darker from there, but Lennon returns as an angel with black wings. Cracks in the city streets replicate striations on her body, and as the song builds to its climax, the singer literally explodes into a cloud of black feathers.

We are honored and excited to be working with Jeffrey Pringle and all of the music lovers at John Galt Entertainment to bring you this incredibly talented and deserving artist. We can almost guarantee the Lennon will be hitting your market this fall. If not as the opener for the Motley Crue and Aerosmith tour, then certainly as the headliner of her own show, and we’d love to help you set up video interviews when she is in your area. We also have enough copies of Damaged Goods to satisfy all of your on-air giveaway needs, so don’t hesitate to be in touch if you need anything at all. If you need more info, call Andy Gesner at 732-613-1779 or email us at info@HIPVideoPromo.com.