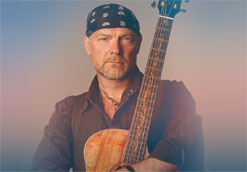 There are three things that all true fans know about Les Stroud. First, followers of TV’s Survivorman recognize that he’s just as passionate about great music as he is about the outdoors. Second, we’ve learned about his immense respect for nature and his commitment to spreading the word about a globe in peril. Third, we know he plays a mean harmonica. On Stroud’s cover version of Joni Mitchell’s 1970 environmentalist classic “Big Yellow Taxi”, he puts all of that on display. His rendition is passionate, his message is clear, and his mournful mouth organ is where it ought to be – front and center.

His acoustic slide guitar is, too. Yes, this is a fully Les Stroud-ized iteration of the song: a blues number, uncompromising, harder and grimmer than the original from Ladies Of The Canyon. Almost fifty years have passed since Joni Mitchell first warned her listeners about the consequences of their behavior, and the trouble has only deepened. Produced by Mike Clink (Guns ‘N’ Roses), Stroud’s “Big Yellow Taxi” reflects the desperation of the prophet who isn’t heeded. He’s updated some of the lyrics, too, and his revision makes it clear that he believes the threat from the corrupt authorities is just as great, if not greater, as the threat from the ordinary thoughtless citizen.

“How Long”, Stroud’s prior single and video, was another wake-up call – a gauntlet thrown to everybody taking the environment for granted. The moving video for “How Long” was shot by frequent Stroud collaborator Matt Mahurin, a veteran video director and animator who specializes in making clips for socially-conscious artists: Sting, Peter Gabriel, Ice T, and yes, Joni Mitchell, too. It was Mahurin behind the camera for Mitchell’s scathing 1986 single “Shiny Toys”, a critique of commercialism. He imparts the same energy to Stroud’s video for “Big Yellow Taxi” – it’s confrontational, but it’s poetic and beautiful, too. Images of nature at its loveliest are juxtaposed with shots of traffic jams, gas masks, and Les Stroud’s anguished face. His eyes shut, his head shaking, the Survivorman sings words that he feels to the bottom of his soul. When he blows that harmonica, we bet you’ll feel it, too.

It’s a blast to be working with Les Stroud to help connect his take on “Big Yellow Taxi” with the world. It’s our sincere hope we can secure this video a place in your cherished programming and online presentations. Rest assured we’ll have plenty of outstanding Les Stroud merch to set up online/on-air contests and giveaways throughout the campaign, so don’t hesitate to get in touch. We’re very excited to see this video hit your airwaves and online properties and as always, please feel free to contact Andy Gesner and the HIP Video Promo team at (732)-613-1779 or email us at info@HIPVideoPromo.com. You can also visit www.LesStroud.ca for more info on Les Stroud.

For info about other Les Stroud videos, click HERE.