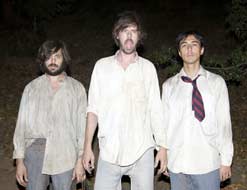 Are you ready to be spooked? If so, go ahead and press play on this ridiculously-enjoyable nightmare of a video. The Liars have always spun entertainment out of our fears and neuroses, and in the “Scissor” clip, they’ve put their twisted vision into overdrive. The video is an ideal teaser for the recently-released Sisterworld: like the album, it’s uncompromising, hallucinatory, thought-provoking, and more than likely to get you looking nervously over your shoulder.

Sisterworld has only been out for a week, but it’s already garnering ecstatic, awestruck, slightly terrified reviews on both sides of the Atlantic. “You are about to enter a universe you’ve never before been to; be prepared”, warns the NME, calling Sisterworld one of the “nastiest, cleverest, and strangest” albums released in 2010. “Let it seep into your brain while you wait for its bulging seams to burst,” suggests Pitchfork, “and you might find yourself unable to turn your ears away.” Most instructive of all: a five-star review in Toro Magazine that concludes, reverentially, “if most popular rock is party music, Liars’ music is for the guy who ditches the scene to wander drunk through the woods. Rock music has to go back outside to stay dangerous, and here Liars go way out, dragging back their finest work.”

Perhaps unsurprisingly, some big names have lined up to reimagine tracks on Sisterworld. The remix disc appended to the deluxe edition of the latest Liars album includes work from Thom Yorke, Babatunde Adibempe, Bradford Cox, and Alan Vega, among others. It’s further testament to the band’s reputation. Not for nothing were Liars selected to headline the ultra-hip MTYMX festival: they’re favorites among experimental musicians and renegade artists.

The video for “Scissor” should contribute to the legend. Master of weirdness Andy Bruntel (St. Vincent’s trippy “Jesus Saves, I Spend”, No Age’s stupefying “Eraser”, many others) has spun a dark fable that echoes many of the themes of Sisterworld: alienation, inexplicable violence, and the cruelty and inescapability of fate. Bruntel’s camera catches Liars frontman Angus Andrew alone in a raft on a placid sea. From his knocked-out appearance and haggard clothing, we can tell he’s been stranded, and floating, for a long time. Castaways frequently see mirages – but when Andrew’s rubber raft starts filling up with stones of unknown origin, he knows he’s not hallucinating. As the dinghy goes down, a passing yacht promises salvation. But when he boards the ship, what he discovers on board is almost unimaginably frightening. We won’t give it away, of course, but he’s got a date there with destiny – one forcefully provided by a strange and hostile universe.

We are excited to bring you this new video from a HIP favorite, thanks to everyone at Mute Records. If you need more info, call Andy Gesner at 732-613-1779 or email us at info@HIPVideoPromo.com.