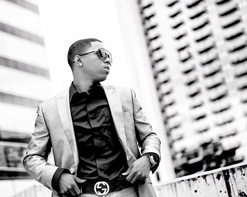 Southern rap artists have always been appreciated for the truth in their lyrics, due to the struggles and pains of Southern life. Artistry as home grown and nurtured as any other, these artists have carved a niche all their own, each different, but delivering the same intensity in their rhyme and flow. It’s Andy Gesner and the HIP Video crew, here with a Louisiana native who delivers the uplifting message of never giving up on your dream until the very day your light ceases to shine. Lil Issue, real name Dedrek Brown, beats the hardships and odds of his childhood to create something positive and unbelievably catchy in “Don’t Wanna Die Broke”

Lil Issue gets his name from growing up without his father, who was robbed and murdered when Issue was only 10 years old. Rather than slipping into a depressive state of drugs, crime and poverty, Lil Issue chose to pursue a nobler calling – music. This rapper’s sound is unique and raw with lyrics full of stories of life, love and honor, sprinkled over infectious beats. He wears his life journey on his sleeve and uses it to paint the pictures that tell the tale he wishes to convey to the world. Overcoming his struggles with poverty, Issue used hip-hop as a way out. Lil Issue got hold of his lyrical reigns through the Baton Rouge based group known as Yes”I AM Ent. The group performed at various block parties and concerts with up to 12,000 people in attendance. The buzz surrounding Lil Issue’s stage persona caught the attention of Def Jam Records president, the late, Shakir Stewart. Impressed with Issue’s flow, Shakir mentored him while introducing him to industry insiders. Issue has already collaborated on releases with Bun B, Rick Ross, and Pleasure P of Pretty Ricky.

“Don’t Wanna Die Broke” is the prime example of what makes Lil Issue so special and a standout from a lot of his competition. Issue’s flow is reminiscent of Kanye West and Jay-Z, however, what really sets him apart is his energy that radiates with positivity. While a lot of rappers fantasize about the riches they claim to have, you can hear the desperation in their tone. With Issue, you can tell that he’s actually having a blast making his music and lives by it. Giving off a P-Diddy meets Will Smith sort of charisma and charm, Issue pierces every frame with the genuine heart of a gentleman as he delivers his contagious rhymes. It also helps that the song packs the catchiest male vocal chorus heard in pop conscientious rap. This should come as no surprise, considering Lil Issue has previously worked with and learned from megahit producer Deezle, responsible for monster radio singles like Lil Wayne’s “Lollipop,” Drake, Wayne and Minaj’s “Bedrock,” and many more. This song is produced by hip hop mastermind Troels.

Lil Issue is no small player when it comes to hip hop. This Southern soon-to-be-star is the complete package: fresh flow, sharp style, and a glowing stage persona. We have lots of Lil Issue goodies available at the office and would love to hook you up with for giveaways and contests, so if you’re interested, let us know right away. If you need more info, call Andy Gesner at 732-613-1779 or e-mail us at info@HIPVideoPromo.com. You can also visit @LilIssue on Twitter and YouTube.com/LilIssueMusic to find out more about Lil Issue and any appearances near you.