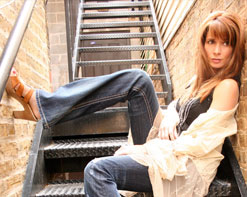 Greetings to our cherished family of programmers, it’s Andy Gesner from HIP Video Promo bringing you a new clip you can really sink your teeth into. During these last few years, there has been nothing hotter than vampires. The vampire craze has reached epic proportions, so it is our great pleasure to bring you the new “Born Twice” video by Lisa McClowry, which immediately establishes itself as the best of the genre. But unlike much of the subject matter available, trust us when we say this is no G-rated music video that you can compare to the sparkling vamps of Twilight.

Think more along the lines of Interview with a Vampire and True Blood where there’s raunchiness and gore to be had. That being said, you wouldn’t necessarily expect the upbeat, dance tunes of Lisa McClowry chronicling the story being told in the video, but she strikes a balance between the musical and visual aspects of “Born Twice”, directed by legendary director/writer Tom Holland (famous for directing cult classics Fright Night and Child’s Play, episodes of Tales from the Crypt and Amazing Stories, writing Psycho II, etc…) The lyrics are appropriate and give enough of a hint in the beginning that what’s to happen isn’t exactly a shock. In the video, Lisa McClowry innocently enters an unsuspecting club and is greeted by a handsome fellow who charmingly says, “Can I help you?” They step away from the bar and into an intimate room where the tension is high between paired off couples. It’s not long till realize that one of the counterparts in each pair is a vampire who seduces their human to the fullest extent. Lisa McClowry finds herself paired off with her charmer and can’t resist his advances, which includes drinking his blood. The next thing you know, Lisa McClowry is a vampire herself and partakes in a Spider-Man-esque upside down kiss with her suitor.

From a songstress who used to sing songs for kid soundtracks like The Adventures of Rocky and Bullwinkle, The Wild Thornberrys and Rugrats In Paris: The Movie, this is a completely different ballgame for Lisa McClowry. But it’s quite evident that this is where she’s comfortable. The Chicago-based singer maintains her mystery not only in the way she delivers her music but in this video for “Born Twice” as well. Tom took notice too when he heard the new album and decided to collaborate with Lisa McClowry for this video. So much so that the clip acts as a trailer for the short film he’s directed with his production company, Dead Rabbit Films, called Vampire’s Dance. Coincidentally enough, Lisa McClowry is the film’s star, where you’ll see her coping with the change in identity – much like in the video for “Born Twice.”

You can find “Born Twice” on Lisa McClowry’s album, Time Signatures, which was released earlier this summer. In it, she collaborated with producer Jim Peterik, the Grammy award winner and Oscar nominee for the famous “Eye of the Tiger,” so you’ll know just what you’ll be taking aware from Lisa McClowry’s latest release.

We’re pumped to be working with Lisa McClowry and can’t wait to see how far her contribution to the vampire trend will go. We’ve got plenty of copies of Time Signatures on hand for your on-air giveaways and listening enjoyment, so please don’t hesitate to be in touch to get your hands on some. If you need more info, call Andy Gesner at 732-613-1779 or e-mail us at info@HIPVideoPromo.com. You can also visit www.HIPVideoPromo.com or www.LisaMcClowry.com to find out more about Lisa McClowry.