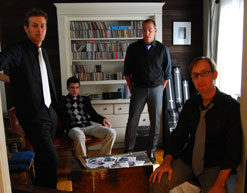 Hey, everyone – it’s Andy Gesner and the staff from HIP Video Promo, here with a beautifully-shot clip from a Santa Barbara quartet with songs that are simultaneously intimate and dramatic. A fetching young woman scribbles words on a pane of glass with a magic marker, snaps a Polaroid shot of what she’s written, and Xeroxes the photograph. Next, she posts the photocopies all over town – on the walls of abandoned buildings, streetlamps, and old-style public telephone stalls. But she’s not the only person watching these streets: from a high window, the members of The Little Heroes take her picture as she stands on a corner with the posters under her arm. Over time, these photographs make sentences, and those sentences send a message: like found poetry, the words on the Polaroids become the lyrics of “Thank You”. The “Thank You” clip is a heady display of remote communication and long-distance correspondence between a band and its audience – something that this group knows quite a bit about. This summer, The Little Heroes released a personalized app to the iPhone store so that fans could follow the band’s doings. The band promises to release exclusive material through the app, further strengthening the bond between The Little Heroes and their devoted fanbase.

The app is an enterprising use of cutting-edge distribution technology, and exactly the sort of thing you’d expect from a clever indie band. But The Little Heroes are no strangers to conventional media. Songs from Cinematic Americana, their descriptively-titled 2007 release, have been featured on episodes of Road Rules, The Hills, One Tree Hill, and other network television programs (including over 25 placements at MTV Networks alone!). The album was praised by alternative and mainstream publications alike; Amplifier, PopMatters, and the All-Music Guide crowed about the gorgeous sound and engaging melodies, while Billboard simply wrote “WE LOVE IT” (caps theirs, not ours!) “Thank You”, the lead single and title song from The Little Heroes’s upcoming release, continues the group’s winning streak: it’s a shimmering slice of romantic guitar-pop, earnestly-sung and passionately-performed. Comparisons to Death Cab For Cutie, The Promise Ring, Son Volt, and even Automatic For The People-era R.E.M. are warranted – this is a thoughtful band with a sound sweeping enough for the wide screen.

The clip for “Thank You” is similarly thought-provoking – and suitably cinematic. The Monroe Collective allows the mystery to build slowly: we’re never told exactly why the young woman is compelled to take all these photographs, or what the relationship is between what she’s writing and what The Little Heroes are singing. But that hardly matters, since her obsessive drive to communicate makes her a resolutely sympathetic character. Certainly the members of the band think so – eventually, they let on that they’ve the message she’s labored to send day after day. And then, in a breathtaking bit of video legerdemain, the “Thank You” clip flashes through those days in a matter of seconds. The the clothes on the characters’ backs change at the pace of a camera-flash, and words in the Polaroid photocopies speed by like the pages of a flip-book.

The Little Heroes “Thank You” video comes to you courtesy of Wednesday Records, and we couldn’t be more thrilled to be a part of their team. If you need more info, call Andy Gesner at 732-613-1779 or e-mail us at info@HIPVideoPromo.com. You can also visit www.WednesdayRecords.com to find out more about The Little Heroes.