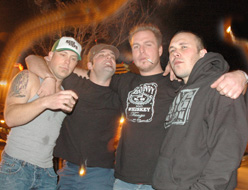 A big hello to everyone in music video land! It’s Andy Gesner and the staff from HIP Video Promo with another video that is sure to rock your world! When we say we’ve got fresh music from Livitz Livitz for you, we mean it in earnest, and in both senses of the word! Not only does the Reno, Nevada quartet make music that is novel and immediate, but they’re also unafraid to ruffle feathers with their lyrics. Outspoken frontman Ryan Puliz has a party to throw and sex on his mind, and he’s not shy about saying so. The titles of their two albums – Beer Bongs and Backflips and the recently-released Footlong – give a pretty good indication of the band’s preoccupations. If there’s hard drinking going on somewhere with good-looking women in tow, the four members of Livitz Livitz want to be there.

The band has played the Warped Tour, but there’s nothing generic-punk about their sound. Much as the lost and lamented Sublime did in the mid-Nineties, Livitz Livitz incorporates elements of ska, punk, dub, and reggae into their hedonistic, radio-ready rock: guitar upstrokes, bass grooves, and a booty-shaking ethos. Make no mistake, though – Puliz can roar when he wants to, and the quartet is perfectly capable of going toe-to-toe with their punk rock peers. The band enlisted mosh-pit vet Ryan Greene (Rancid, NOFX, Authority Zero) to produce Footlong, and he’s toughened up their backbeat, thickened the guitars, and presented the Livitz boys as a force to be reckoned with.

“Dirty Kelly”, the lead single from Footlong, places Puliz’s obsessions front and center: loose women, intoxicants, unnatural acts. The song tells the story of a good girl gone bad, and Puliz discharges it with rough wit and maybe even a touch of sympathy. His croon is melodic throughout; no matter how caustic the subject matter becomes, he keeps his balance and sings his biting verses with placid assurance. The tension between the easygoing performance and the bare-knuckle content is part of what’s made Livitz Livitz one of the most interesting (and representative) bands on the Nevada club circuit.

The clever clip for “Dirty Kelly” literalizes a typical band complaint – rock groups will often get offstage after a gig before a well-coiffed, immobile crowd, and call the audience “a bunch of mannequins”. At the Livitz Livitz gig portrayed in this clip, though, there’s only one mannequin in the house, and through cues and associative camera work, we’re encouraged to believe that this is Dirty Kelly herself. As she stands at the back of the packed house, she really does look like a typical disaffected concertgoer, self-impressed and staring back at the band impassively. What’s so amusing about the “Dirty Kelly” clip is how familiar that stance is to anybody who’s ever been in a club, and what it says about the models for our behavior on nights out.

Directed by indie moviemaker Paul J. Aspuria of Film Antics, the “Dirty Kelly” clip also shows how raffishly engaging the members of Livitz Livitz can be in a concert setting. But the mannequin is the star of this show. Aspuria’s camera follows “her” into the dark corners of the nightclub, where she’s caught in the act with different men and women. In one memorable shot, she exits the club on a slide, as the other members of the audience stare back at her in contempt. Later, the band walks outside to find a line of mannequins queuing up to take her place. By being willing to laugh at themselves and poke fun at their own scenario, Livitz Livitz brings us all in on the joke – and manages to say some revealing things about the state of the modern rock and roll experience.

We’re very excited to be working with all of the cool folks at Em Dash Music to bring you this tremendous video. We’ve already got plenty of copies on hand of Footlong, and it is our greatest desire to make sure all of your Livitz Livitz needs are met in a timely fashion. If you need more info, call Andy Gesner at 732-613-1779 or e-mail us at info@HIPVideoPromo.com.