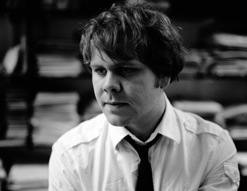 Hey, everybody, it’s Andy Gesner and the staff from HIP Video Promo! The year has barely begun, but the first must-have album of 2009 is already out. Dear John, a quiet masterpiece from the unassuming but formidably-talented Loney Dear, arrives on these shores from the university town of Jönköping, Sweden. It’s the same small city that gave the world I’m From Barcelona, and it was on IFB’s Let Me Introduce My Friends (on the track “This Boy”) that many Americans first heard the voice of Loney Dear frontman and songwriter Emil Svanängen. In his native country, Svanängen had already made a name for himself: his first four self-released albums had built him a substantial following among Sweden’s adventurous music listeners. Loney, Noir, his 2007 issue and the first Loney album to be given an international release, established Svanängen as a creative pop explorer with a gift for melody and a knack for generating compelling electronic textures. Many home-recorders can draw listeners into their bedrooms, Emil Svanängen is the rare d.i.y. artist whose songs sound as big and as cinematic as any of those made in state-of-the-art studios.

Rave reviews from the recently-released Dear John continue to pour in from all over the globe. Instantly beloved in Scandinavia, it’s winning hearts stateside, too. Paste magazine calls Svanängen an electrified version of Bon Iver or Iron & Wine, and praises Dear Johnfor its sense of intimacy, its pulsing beats and surging melodies, and its compelling performances. “Chock-full of luminous instrumental textures and heartfelt lyrics”, raves Margaret Reges in the All-Music Guide, “Dear John makes good on all the tremulous, tender, wistful promise of the debut”. American audiences have been every bit as impressed as the critics are, especially since Svanängen is no bedroom recluse. He’s a compelling and generous live performer, too, and he’s been captivating audiences across the States during Loney Dear’s continental tour with the like-minded Andrew Bird.

In concert, Svanängen is backed up by an able band, but on record, he does almost everything himself. He’s alone again in the spooky clip for “Airport Surroundings”, behind the wheel of a speeding car on a lonely stretch of Swedish road. It’s night, and the light from inside Svanängen’s auto is barely supplemented by highway illumination. The Loney Dear singer is delivering something – we’re not shown exactly what, but it sits atop the dashboard in a plastic bag, and we can tell he’s nervous about it. Director Marcus Söderlund (Sahara Hotnights, Jens Lekman, Air France) shoots Svanängen from atop the hood of the car, changing perspectives from time to time, but keeping the camera fixed on the singer’s worried face. Streetlights streak over the windshield, the car disappears inside tunnels, and darkness periodically swallows the automobile. Through it all, Svanängen drives on, eyes on the horizon, headed toward his mysterious rendezvous.

As always, Polyvinyl Records has hooked us in with another amazingly cool video for you and your viewers to enjoy. Loney Dear is currently on tour all over the US, including performances at this year’s SXSW in Austin, TX! If you need more info, call Andy Gesner at 732-613-1779 or e-mail us at info@HIPVideoPromo.com. You can also visit www.PolyvinylRecords.com or www.LoneyDear.com to find out more about Loney Dear.