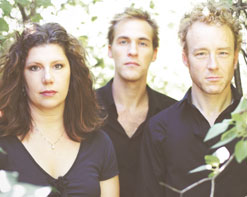 Greetings and salutations to all of my esteemed programmers! It is my great pleasure to bring you this beautiful and haunting clip from Duluth, Minnesota’s indie-rock giants Low. “Try to Sleep” – the first single from their new LP C’mon – is a perfect distillation of the unique sound the band has been cultivating since the early 90’s: solemn and lovely, spare and spacious, slow and powerful, driven home by the delicate harmonies of Alan Sparhawk and wife Mimi Parker. As it turns out, actor John Stamos – an icon of the small screen best known for his role as “Uncle Jesse” in the classic family sit-com Full House – is a fan of Low and a friend of C’mon co-producer Matt Beckley. After hearing the concept of the video for “Try to Sleep,” Stamos was more than happy to take the lead role. This unexpected convergence of talent has made for one of the best videos of the year.

C’mon – Low’s ninth studio album and third for Sub Pop – is the first record they’ve released since the legendary Robert Plant covered two of the band’s songs on his 2010 solo album Band of Joy, subsequently earning a Grammy nomination for his take on “Silver Rider” from their 2005 album The Great Destroyer. For the band’s many fans, this high-profile acknowledgment of Low’s songcraft was well-deserved and long overdue. Low singer/guitarist Sparhawk modestly said in reaction, “Having one of the best singers in the world sing your songs is okay by me.” But as a result, Low’s name was suddenly being bandied about in the mainstream for the first time. And a host of new fans on top of the legions of old ones have been anticipating the release of C’mon. And it’s been accurately described as their most accessible LP to date. Whereas in the past the band has experimented with louder dynamics (with 2005’s The Great Destroyer) and more complex confrontational tones (on 2007’s Drums and Guns), C’monfinds the band in exceptional form, moving from strength to strength, delivering some of their finest material of their career. Recorded at Sacred Heart Studios – a former Catholic Church – the grand space captures and enhances the band’s best qualities, lending the recordings an ethereal vibe that can be heard from the first notes of album opener “Try to Sleep.”

In the video, Stamos and a beautiful woman portray a couple of actors filming a driving sequence in the old style: the car remains stationary while a projector screen in front of them displays a moving landscape, creating the illusion of travel. While Low provide the dreamy soundtrack, the couple begin their journey, and we are immersed in the illusion. Stamos and his partner lovingly lip-sync the disquieting lyrics to each other: “You try to sleep / but then you never wake up.” All the while, Stamos deftly conveys a complicated sadness in his eyes that reveals itself in the video’s final moments, leaving you with a lingering uneasy feeling. Much like the best of Low’s catalogue, it’s the type of haunting feeling that will call you back again and again.

The KEXP Blog of Seattle named “Try to Sleep” their Song of the Day last month, calling it “emotionally engaging and resonant in its capacity for vast yet intimate space.” Prefixmag.org called it “a beautiful, spacious track, marked by harmonizing vocals, delicate glockenspiels, thundering drums, and a memorable main melody.” And early reviews of C’monhave been glowing. NPR wrote “C’mon celebrates a rich discography, sequenced like Low’s finest moments over 45 minutes.” Whether you’ve been digging Low for years, or this is your introduction to the band, “Try to Sleep” is a song and video that you may find stuck in your head the next time you’re trying to sleep.

It’s our great pleasure to bring you yet another stellar Sub Pop video. As always we’re here to hook you up with the most coveted Sub Pop goodies including CDs, posters, stickers, and much more so please don’t hesitate to be in touch to get your hands on them! If you need more info, call Andy Gesner at 732-613-1779 or e-mail us at info@HIPVideoPromo.com. You can also visit www.SubPop.com, or www.ChairKickers.com to find out more about Low.