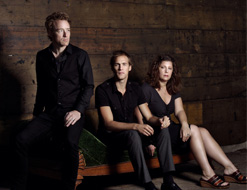 Howdy esteemed programmers! It’s Andy Gesner and the HIP Video staff, here to bring you another clip from Minnesota’s prominent indie rock pioneers – Low. “Especially Me,” their latest entry from the fantastic and acclaimed album C’mon is the perfect follow up to the John Stamos approved clip for “Try To Sleep” we sent you earlier this May.

Low has been working on their down tempo sound since they started out in 1993, and have been drawing closer and closer to perfection ever since. For their latest album, the band set up inside a former church in their hometown of Duluth, Minnesota and recorded the whole thing there. 2002’s Trust, recorded in the same room, is a good reference point for the sonic character of C’mon, though the low end on this album is much airier thanks to co-production by pop mastermind Matt Beckley (Leona Lewis, Katy Perry, Avril Lavigne, Ke$ha). Maybe it was the acoustic setup of the building or a bit of divine intervention, but the resulting record, C’mon, ended up resonating outside those walls and within the hearts of critics everywhere. Pitchfork gave the album a high rating, commenting on the diversity of the record and calling it a “collection drawn from throughout the last decade.” The publication also named “Especially Me” as their favorite track on the record. The Guardian’s 4/5 star review adds that “C’mon is an invitation too intriguing not to take up.” BBC Music comment by saying that album shows off “Low’s now-perfected ability to harness tension and tweak their own performance for maximum impact.” Not to be left out of the excitement, SPIN chimes in with a glowing, near perfectly scored, review themselves!

“Especially Me” has already catapulted to the top of blogs everywhere, earning features in Pitchfork TV, Stereogum, The Awl, Under The Radar, Clash, and many more. This time around, Low takes a more band centric approach, featuring vocalist and drummer Mimi Parker riding through the New York City subway rails in fast-forward fashion. The clip clashes the slower and more melancholy mood of the song with the urgency of the veins in which NYC’s busy lifeblood travels in. It is also very interesting to see the urban setting captured by a song that is almost country in feel, mixing the claustrophobic subway tunnel with C’mon’s vaulted ceilings, natural reverb, and audible affinity for organ and strings.

It’s our great pleasure to bring you another Sub Pop video, full of outstanding personality. Low is currently supporting the release with a US tour, with dates in England to follow. As always we’re here to hook you up with the most coveted Sub Pop goodies including copies of C’mon, so please don’t hesitate to be in touch to get your hands on them! If you need more info, call Andy Gesner at 732-613-1779 or e-mail us at info@HIPVideoPromo.com. You can also visit www.SubPop.com or www.ChairKickers.com to find out more about Low.

For info about Low’s “Try To Sleep” video, click HERE